Land Trade to Protect the North Side of Mt. Hood Moving Forward 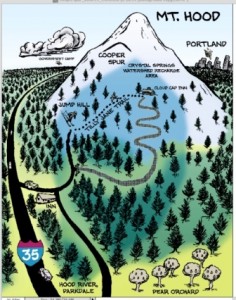 Senator Wyden led the charge in Congress, the Forest Service will be trading land in Government Camp for land on the North side.  For nearly ten years, the conservation groups and recreation clubs involved in the the Cooper Spur Wild and Free Coalition have been working to protect the historic backcountry on the North Side of Mt. Hood.

In 2001 Hood River County approved the sale of county land around the Cooper Spur Ski area to Mt. Hood Meadows, a developer seeking to build a destination style resort. Cooper Spur Wild and Free (CSWF) is a diverse coalition of conservation, citizen and recreation organizations that came together in response to Meadows’ proposal. After a long period of negotiation, CSWF secured an agreement with Mt. Hood Meadows for a land trade, and in 2009 President Obama signed the Mt. Hood Wilderness bill into law, directing the Forest Service to move forward with the trade.

The Cooper Spur Wild & Free Coalition represents the interests of its member organizations which include the Northwest Environmental Defense Center, the Hood River Valley Residents Committee, Oregon Wild, Sierra Club, Bark, Oregon Nordic Club, the Mazamas, the Ptarmigans, the American Alpine Club, the Portland Audubon Society and the Friends of Tilly Jane.  These organizations have long-supported the long awaited consummation of the “clean sweep” leading to the permanent protection of the North side because the public stands to gain a lot from this trade.

The trade will return around 770 acres of private land to public ownership on the North Side of Mt. Hood in exchange for 120 acres of Forest Service land in Government Camp.

The conservation benefits go beyond the mere trade of land of equal value.  The clean sweep will permanently protect historically significant and environmentally sensitive lands around Cooper Spur, preserving over 2,000 acres of priceless backcountry in the Tilly Jane Roadless Area on the North Side of Mt. Hood as Wilderness and 2,000 acres as part of the Crystal Springs watershed protection zone.

The Crystal Springs Watershed provides 25% of the water to Hood River Valley residents and farmers and this area will be protected.

In Government camp, Mt. Hood Meadows will receive up to 120 acres of land in two parcels, zoned for development, that are adjacent to currently developed land. Unlike Meadows’ initial proposal on the North Side of Mt. Hood, the developer’s proposed use for the land in Government Camp is consistent with that community’s existing revitalization plan. Furthermore, the terms of the trade will protect all wetlands and trails within the parcels with conservation and trail easements.

Cooper Spur Wild and Free believes the environmental and conservation benefits of this trade are clear.   As the process moves forward, the public will have more opportunities to weigh in.  Additional information about the Cooper Spur-Government Camp trade can be found on the Forest Service website.

An Economic Assessment of the Cooper Spur Settlement Agreement