Another Blow to Oregon LNG 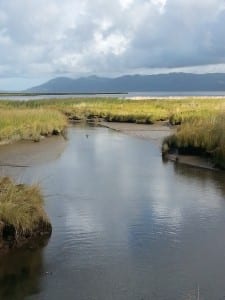 Last week, a Hearings Officer in the City of Warrenton denied land use permits for Oregon LNG’s natural gas terminal. Crag worked together with clients Columbia Riverkeeper and Oregon Shores Conservation Coalition to demonstrate the proposal’s risks to the community and significant threat to intertidal wetland habitat critical to endangered salmon survival.

The project would require 109 acres of estuary dredging and 35 acres of wetland fill on the East Skipanon Peninsula just inside the mouth of the Columbia River. Some of the area’s most important recreational fishing happens adjacent to the site at Buoy 10. In denying the permit, the Hearings Officer found that the project would unreasonably interfere with public trust rights–namely impacts on fish, fishing, fish habitat, and on-going fish recovery efforts.

Because so much shallow water and wetland habitat has been already lost in the Lower Columbia River Estuary, the remaining shallow and middle depth habitat is ecologically significant. The Hearings Officer found that Oregon LNG had not shown that its attempts to mitigate impacts to the estuary and wetlands would be adequate or successful.

Even though energy projects like this one are regulated by the Federal Energy Regulatory Commission, local governments have authority to determine compliance with local laws that are part of the Oregon Coastal Management Plan under the Coastal Zone Management Act. Clatsop County has already denied permits for the pipeline, and the City’s decision now adds another blow to Oregon LNG’s plans. Crag will work with Columbia Riverkeeper and Oregon Shores to defend the decision.