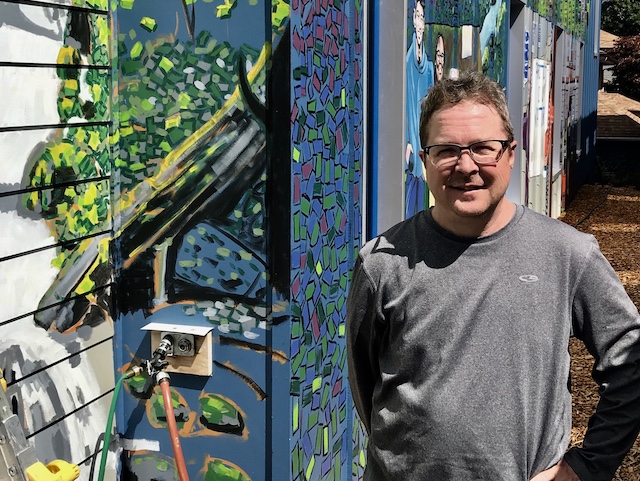 When I first met Carl Annala he was high up on a ladder, shielded from the morning sun by a wide-brimmed hat, intently painting his mural on the side of Crag’s office. It was the second mural he’d been commissioned by Crag to paint, and he seemed almost finished – Mount Hood loomed, pristine, on the right side of the wall, and intricate mosaics of vibrant greens, blues, browns, and greys spread towards the foreground, a thick forest dappled in light and shadow.

From his perch, Carl was at work on a tree that was emerging prominently on the left side. Like every other feature of the mural, it was impossibly detailed – up close, I could see Carl painting discrete, unblended dashes of color, a patchwork of hues. Upon backing up a few paces, the work transformed, the blocks of color smoothing into a unified landscape, textured and varied.

As I learned later, this is an effect Carl enjoys. He described my precise experience during our chat: “Some people will see a painting from twenty yards out and be like, ‘That’s a great photo!’ and then they get up close and say, ‘How did this look like a photo to me? It’s just a mess of paint marks!’” That type of comment is what Carl wants to hear, and it’s an impressive effect to witness – both up close and from afar.

Achieving such big picture precision in mural proportions is especially impressive when you watch Carl work – he’s so honed in on one detail that it’s hard to fathom how he can make the whole piece look cohesive. His answer? “Practice. You do this a lot and you get better at it. Persistence is really one of the most important things in the arts.”

For someone like Carl, the ability to alternate between large-scale thinking and intense focus is a necessity – he’s simply involved in too much. He’s an established artist, popular for his nature scenes as well as his abstract art; he performs guitar, bass, drums, and vocals in various bands and across genres; he dances and serves as artistic director in a company called Ash Pillar Butoh; he teaches classes at the Matt Dishman Community Center in drawing, acrylic painting, colored pencil, and pastel. Talking to Carl, you get the sense that this list is only scratching the surface.

Though it seems like his every waking moment must be occupied by artistic expression in some form, as Carl describes it, he’s not stretched too thin. “I’m sort of like a comet going through these worlds.” In fact, his diversified interests come easy: “The art world’s kind of like the mycelium,” he explains, referring to the branching network of filaments that fungi use for nutrient absorption. “There’s stuff that stretches all the way through and sometimes you pop up in a different zone.”

In Carl’s case, the different zones of the art world work cooperatively to feed his creative energy, each in a unique way. “Those different disciplines that I do allow me to exist in each one comfortably. […] I can let painting be beautiful, however sinful that sounds in the art world, whereas I can do a dance performance that’s really ugly, and then that’s beautiful in its own little circle. Or I have different types of bands: I’ve got a death metal band, and I’m starting a country band. So those are really opposites – one lets you scream and go full volume and the other one lets you be sensitive.”

There’s no question that Carl is rooted in the Portland scene. He spent some time exploring the art and music in Washington D.C. while attending the Corcoran School of Art and Design, but ultimately returned to Portland, feeling that he needed to learn more about the process of creating art before delving into concept-heavy programs like Corcoran. He received his Bachelor of Fine Arts degree from Pacific Northwest College of Art. He went on to Portland State University for his Master’s, and then studied with abstract expressionist painters in the area. But being so established can come with a price, according to Carl: “I’m not ‘new’ news, whereas if you move here you can land and make a splash,” he says, adding, “It really does behoove an artist to move around – you not only gain experience from other places but you also renew yourself each time.”

In terms of places to land, though, Portland seems like a pretty good one. Carl agrees. “It’s pretty rad.”  For a start, the city provides great fodder for nature paintings. Carl begins his painting process in the woods, where he snaps the photos that he’ll use for reference. “You can access the wild here so easily,” he remarks. “My paintings look like they could be in the middle of nowhere, but really I’m just shooting off of a trail.” His favorite place to go? “The Columbia Gorge, by far. I don’t mind a little bit of a steep hike, and getting up into the arch side of the gorge has a lot to offer as far as rocks and broken branches and moss.”

When searching for shots, Carl waits to see what catches his eye. “I’m looking for something dramatic with light… like a dark trunk that’s next to a shaft of green being illuminated or something, or a tree that’s been uprooted and the root ball is sort of this nasty snarl of things. So I kind of look for things that are a bit messy and a bit like, ‘Oh, I’d like to see how I solve painting that.”

Painting such a tangle is a nice challenge for Carl, who tries to avoid mimicking his source material. “That was one thing they said to me in grad school, ‘Well why don’t you just show photographs if you’re gonna do that?’” Carl recalls. He realized, “I need to make the paint a really important part of the painting. […] I’ll just work more energetically and use a lot of paint.”

At the same time, Carl understands the importance of restraint, especially when he’s nearing the finish line for a piece. “I think for me there’s definitely a point where I get this physical sensation that the surface is busy enough – there’s enough texture and enough form.” As Carl knows, there is some danger in going too far.  “There’s something in my work that loses energy when it’s super defined. The feeling should be, ‘oh, these marks are almost moving,’ or something.”

When I talked to Carl, he was nearing this point with Crag’s mural. As final touches, he snuck in animals – some obvious, others well-camouflaged. That’s part of the wonder of a mural like Carl’s: the more you look, the more you see. Each time I’ve crept around the building to study it, I’ve noticed something a little different; most recently, it was two yellow mushrooms – perhaps Oregon’s official state mushroom, the Pacific Golden Chanterelle – peeking out from beneath a log.

The mural, at once tangled yet precise, pristine yet wild, seems to represent Crag in a way words don’t quite manage. Carl, masterfully navigating binaries once again, manages to pull it off.

Feel free to come look at Carl’s mural on the side of Crag’s office building at 3141 E. Burnside St., Portland. Pop in to say hello to Crag staff if we’re around!

Learn more about Carl and check out his work by visiting his website! 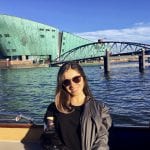 Genevieve Beske is a DukeEngage intern at Crag for Summer 2019. She is a rising junior at Duke University majoring in English, and is hoping to one day pursue a law degree. She is passionate about the environment and loves nature, and has enjoyed learning about how Crag works through complex environmental problems and handles the challenges of nonprofit work.