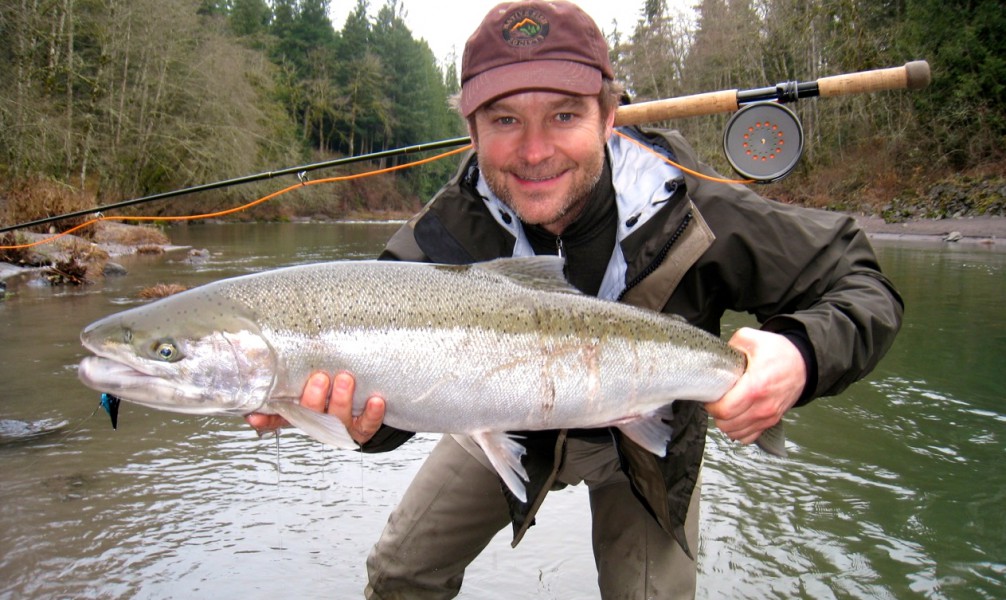 Mt. Hood, Oregon. On June 4, 2013, four conservation groups – Bark, Friends of Mount Hood, Northwest Environmental Defense Center and the Oregon Chapter of the Sierra Club – filed a motion for a preliminary injunction seeking a court order restraining the Forest Service and RLK and Company (“RLK”), the operators of Timberline Lodge, from proceeding with construction of over 17 miles of downhill mountain bike routes and a skills park in the sub-alpine headwaters of Still Creek and the West Fork Salmon River.

In response, the U.S. Forest Service and RLK chose to not defend their decision and the court entered an order enjoining construction of the downhill bike routes and skills park until the court reaches a decision on the merits.

In their motion the conservation groups did not object to the Forest Service and RLK going forward with much-needed restoration work, and so this summer the Forest Service and RLK plan on attempting restoration of areas that are degraded from previous ski-lift construction and road building. The order grants the conservation groups the exact relief they sought in the motion. 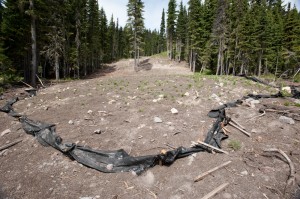 In the suit, the conservation groups allege that the Forest Service violated the National Forest Management Act’s substantive standards that protect aquatics, the National Environmental Policy Act and the National Forest Ski Area Permit Act for the agency’s final approval of RLK’s plan to develop a lift-assisted downhill mountain bike park on Mt. Hood. (For background, visit https://crag.org/2013/05/18/case-will-decide-future-of-hoods-alpine-flanks-at-timberline/ and see attached Memo in Support of Motion).

After the suit was filed, RLK stated on its website: “The lawsuit essentially makes the same arguments put forth in this same group’s formal appeal which was subsequently rejected by the Regional Forester in February, 2013 after a rigorous environmental analysis by the USFS. Our proposal has been studied extensively through a 3-year process that included substantial input from the public, as well as State and Federal agencies. The Decision Notice and its Finding of No Significant Impact was made back in November 2012.”

However, when push came to shove, RLK and the Forest Service caved and refused to defend their decision.  A look at the scientific controversy surrounding the project may explain why they did so.

To secure an injunction, the conservation groups submitted expert statements from two top scientific experts and from Steve Wise, Executive Director for the Sandy River Basin Watershed Council. The experts underscored how the Forest Service has engaged in a results-driven process riddled with erroneous and unsupported assumptions regarding the project’s likely impacts on the natural environment.

Rhett Lawrence stated, “We asked that the restoration move forward so the public could have an opportunity to field verify numerous scientifically controversial claims. Given our knowledge of the challenges of restoration on Mt. Hood, we expect it will be many years, if not a decade, before Timberline has actually achieved its restoration goals.”

In a filing submitted to the court, Robert Wisseman stated that the project will increase sediment delivery to Still Creek and the West Fork of the Salmon, which would likely contribute to a trend towards loss of viability and Federal ESA listing of the Scott’s apatanian caddisfly. In its Environmental Assessment the Forest Service concluded without any analysis that the project would not have such an impact on the species. Mr. Wisseman is a widely recognized expert in his field who was retained by the Forest Service to conduct surveys for the Scott’s apatanian caddisfly in Still Creek and the West Fork of the Salmon in 2010. Mr. Wisseman actually trained Forest Service personnel to conduct such surveys. In his technical declaration filing, Mr. Wisseman sharply disagreed with the Forest Service’s conclusions and identified a number of key issues that the Forest Service must address before moving forward with new degrading activities.

The Scott’s apatanian caddisfly is a glacial relict species that has only been found in the West Fork Salmon River between about 4,000 and 5,000 feet of elevation and in the nearby Iron Creek drainage at about 4,000 feet of elevation. Only a few individuals have ever been collected from Iron Creek, and the West Fork Salmon River population is the only known potentially viable population of the species. Mr. Wisseman believes that the Scott’s apatanian caddisfly historically occurred in the headwaters of Still Creek. Caddisflies are an integral component of many freshwater ecosystems and are important in fish diets. Portions of Still Creek within the project area are designated critical habitat for the federally-listed Lower Columbia River steelhead. Further increases of fine sediment loading into Still Creek and the West Fork of the Salmon will impair the survival and reproduction of the Lower Columbia River steelhead and other salmonids.

In a declaration filed with the Court, Jonathan Rhodes, an expert hydrologist with over thirty years of experience, stated that the Forest Service’s analysis fails to adequately describe and assess the limited effectiveness of restoration in ameliorating the significant impacts of bike route construction and operation on soils, watersheds, water quality and aquatic habitat. Mr. Rhodes supplied the Forest Service with numerous scientific studies, many authored by Forest Service personnel, which contradicted the agency’s controversial conclusions and assumptions about the project. One of the most controversial claims that the agency made was that the proposed restoration work would be immediately effective. Mr. Rhodes and Mr. Wisseman stated that RLK’s previous attempts to re-establish vegetation on areas that were disturbed by construction had failed and that further attempts to re-establish vegetation to counter erosion may take years, if not decades, to succeed. Mr. Rhodes questioned how the agency was able to conclude that just six acres of restoration work in this fragile sub-alpine environment would immediately and completely cancel out the impact from twelve acres of newly degraded, bare mineral soils that would be created by the bike routes and skills park. 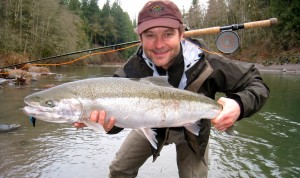 Lucky fisherman with a steelhead on the Sandy River.

The Sandy River Basin Watershed Council also prepared a declaration that was submitted to the court and recommended against construction of the bike park for several reasons. First, the project area contains significant aquatic and watershed resources for listed salmonids and other wildlife. Second, the project area is currently in a “not properly functioning” condition. Third, the project would have an individually and cumulatively significant impact on habitat, water quality and other important ecological factors. The Sandy River Basin Watershed Council is a non-profit, citizen-led organization that has worked in partnership with the Forest Service, other state and federal agencies, private landowners and volunteers for over 12 years to restore portions of the Sandy River Basin.

Dennis Chaney, a member of Friends of Mt. Hood stated, “Given the degraded condition of the sub-alpine lands around Timberline ski area from previous construction activities, we agree that the Forest Service and RLK should first proceed with plans to attempt the restoration work this summer while holding off on further damaging this sensitive area.” The groups also delivered a public settlement statement to the Forest Service offering “to meet with the Forest Service, the ski area operator(s) and the mountain biking community to discuss appropriate locations for more mountain biking opportunities on Mt. Hood National Forest.”