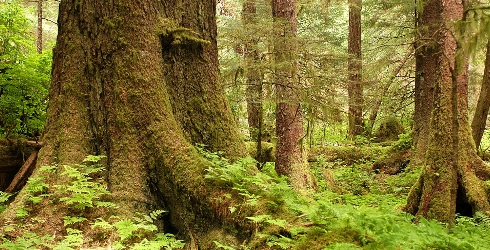 Crag recently won a key victory in the fight to preserve old-growth forest and wildlife habitat in the Tongass National Forest.  In the case – Greenpeace v. Cole – the Ninth Circuit Court of Appeals threw out four old-growth timber sales that would have logged important habitat for the rare Alexander Archipelago wolf.  Crag filed the case on behalf of Greenpeace, Inc. and Cascadia Wildlands.

The Tongass contains some of the most magnificent old-growth forests remaining in the United States, and these forests are laid out across both the mainland as well as a network of coastal islands known as the Alexander Archipelago.  These coastal rainforests provide irreplaceable habitat for the wolf, a unique subspecies of the gray wolf, which can swim from island to island and dens in old-growth forest near salmon streams and fresh water.

The Forest Service was using a computer model to estimate impacts to wolves and deer, but the model suffered from numerous errors that greatly underestimated the damage done to these old-growth dependent species.  In a unanimous decision, the three-judge panel rejected four separate timber sales, which collectively would have logged over 1,700 acres of old-growth forest.  The Court recognized that the Forest Service was ignoring the best available science on how old-growth logging affects wolves and deer, instead relying on inaccurate and outdated data.

Years of intensive old-growth logging and road building have caused significant declines in wolf populations in the Tongass, and the errors identified by the Court have also plagued every other sale approved by the Forest Service in this area from 1996 to 2008.  For years, Greenpeace and others attempted to bring their concerns directly to the federal government, but the Forest Service refused to acknowledge the best available science or admit the errors in its computer models.  After running out of options, Greenpeace contacted Crag and moved forward with court action as a last resort.

Chris Winter, staff attorney and Co-Executive Director, handled the case for Crag and its clients.  Winter said, “The Forest Service ignored the best available science on the impacts of clearcutting old-growth forest in the Tongass.  The court issued a common sense decision requiring more from our federal government.”

For more information, the read the 9th Circuit Court of Appeals opinion and the press release distributed by Greenpeace and Cascadia Wildlands.