Today the Crag Law Center filed a complaint in federal court on behalf of Bear Creek Recovery to hold the City of Molalla accountable for years of alleged violations of the Clean Water Act.  Bear Creek Recovery is a group of local Molalla residents that are concerned about the City’s actions and the possible impacts to human health and water quality. 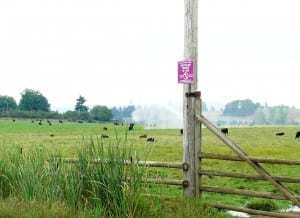 Field outside Molalla, Oregon where the City is spraying reclaimed sewage wastewater. Photo by Susan Hansen.

The City of Molalla operates its sewage treatment plant under a permit issued by the Oregon Department of Environmental Quality.  During the dry summer months the City disposes of reclaimed wastewater by spraying fields adjacent to Bear Creek, a tributary of the Pudding River.  The permit requires the City to have DEQ authorization before spraying and also places limits on irrigation practices.  In the wet-weather months the City is permitted to discharge wastewater into the Molalla River.  Both Bear Creek and the Molalla River flow to the Willamette.

The City has repeatedly violated the terms of its permit over the past five years, particularly during the summer months, by spraying wastewater on unauthorized fields and in excessive quantities, causing ponding and runoff into Bear Creek.  Susan Hansen, a Bear Creek Recovery member, has consistently been in contact with DEQ staff regarding the City’s violations.  DEQ sent several warning letters to the City in the past but has never taken any formal enforcement action against the City for the persistent violations.

This is the second time the City has been sued for Clean Water Act violations at its sewage treatment plant.  In 2006, Crag worked with a coalition of parties to sue the City over many of the same violations at issue in this new lawsuit.  That suit resulted in a consent decree that required the City to comply with its permit and the Clean Water Act; the decree expired in 2009 and the City has continued its pattern of violations.   The history of violations at the City’s facility is the result of poor maintenance and mismanagement of the sewage plant as well as failing infrastructure.

The Clean Water Act is in place to protect the safety and health of our rivers for fish, wildlife, and human uses for recreation, swimming, and drinking.  Treated sewage wastewater contains a level of E. coli that is not safe for human contact.  Bear Creek Recovery members are understandably concerned about the potential risks the City’s pollution poses to the health of Bear Creek and the community.

Under the Clean Water Act, individual citizens or groups may bring an action against an alleged violator, to protect the waters they care about and depend upon.  “We can no longer sit back while DEQ looks the other way,” says Susan Hansen.  “We have a right as citizens to uphold the Clean Water Act and see that the City shows progress toward improving water quality in Bear Creek and the Molalla River.”  Crag and Bear Creek Recovery are hopeful that this suit will result in long-term solutions to the City’s problems to prevent future violations.

See the 60-Day Notice letter sent to the City of Molalla and our Press Release announcing the lawsuit.