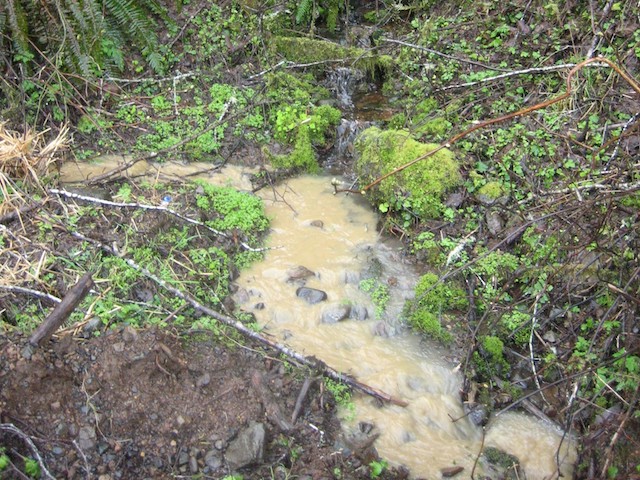 In August 2010, Crag secured a Ninth Circuit Court of Appeals ruling that rainwater channeled by logging roads into rivers is pollution and can be regulated under the Clean Water Act. Now, the Oregon Department of Forestry can no longer channel polluted stormwater into rivers and streams.

In August 2010, the Ninth Circuit Court of Appeals ruled that rainwater channeled by logging roads into rivers and streams is pollution and can be regulated under the Clean Water Act. The Oregon Department of Forestry (ODF) and the timber industry must now have permits before discharging polluted stormwater into Oregon’s rivers and streams. This case, which originated in the Tillamook State Forest, has wide-reaching implications for logging operations in the Pacific Northwest.

In the western United States, logging roads are one of the worst sources of sediment pollution, which smothers salmon spawning beds and harms water quality. In the Tillamook State Forest, ODF has for years designed their logging roads to use ditches and culverts to dump polluted stormwater directly into coastal rivers and streams, oftentimes onto salmon spawning grounds.

When logging trucks pass over the roads, they grind up the gravel and dirt on the surface of the road. Small rocks, sand, and dirt are then washed into the collection system and discharged directly into the streams and rivers. Stormwater samples at eleven points along logging roads in Tillamook National Forest contained significant amounts of sediment.

Sediment pollution degrades water quality and contributes to the destruction of salmon and their habitat—it can dramatically harm salmon and steelhead by clogging their gills, smothering spawning beds and killing prey insects. Since the runoff was diverted by the roads, it was what’s called  “a point-source discharge,” which requires a special permit under the Clean Water Act (CWA). However, the Oregon Department of Forestry and the timber industry had been ignoring CWA permitting requirements for years while increasing the level of timber harvest in the Tillamook.

For this case, Crag partnered with long standing client Northwest Environmental Defense Center (NEDC) and its co-counsel, Paul Kampmeier of the Washington Forest Law Center. On behalf of NEDC, we brought the case against the Oregon State Forester and the Oregon Board of Forestry as well as a number of timber companies.

On August 17th, 2010, the Ninth Circuit sided with our clients, and held that ODF must have a permit before it discharges polluted stormwater into Oregon’s rivers and streams. ODF could no longer avoid the requirements of the Clean Water Act.

“Logging roads kill salmon, plain and simple. The timber industry and ODF have tried to evade the Clean Water Act for years, and this decision will hopefully bring an end to the ‘stick your head in the sand’ approach to management. This decision will result in permits for logging roads on federal and private land as well, which will improve water quality throughout the region.”

The decision came at a particularly inopportune time for ODF. The Oregon Board of Forestry, upon ODF’s recommendation, had recently decided to increase the level of clearcutting on the Tillamook State Forest.

“Oregon state lands support coho, chinook, and chum salmon, steelhead, cutthroat and rainbow trout, in addition to numerous other species, all of which have suffered unnecessarily as a result of the unregulated discharge of sediment from logging roads. I hope that today’s ruling will mark a turning point in the management of our forests, and that we will soon see an end to the devastating impact of logging road pollution.”

Check out news coverage of this case:

Crag represented the Northwest Environmental Defense Center (NEDC) and worked with its co-counsel Paul Kampmeier of the Washington Forest Law Center in this case.

Established by a group of professors, law students and attorney alumni at Lewis and Clark Law School in 1969, NEDC is an independent non-profit organization working to protect the environment and natural resources of the Pacific Northwest.