Youth plaintiff Kelsey Juliana speaks during a press conference on the sidewalk in front of the United States Supreme Court in Washington. The youth with her are part of 21 plaintiffs in a landmark federal lawsuit which accuses the federal government of violating their constitutional rights. Crag is representing Kelsey in the climate lawsuit against the State of Oregon. (Robin Loznak)

In 2015, a group of youth plaintiffs, including several Oregon youth, filed a lawsuit in the federal district court of Oregon challenging the U.S. government’s failure to take sufficient action to address climate change. This case is part of the national and international Atmospheric Trust Litigation campaign. Crag represents youth plaintiffs in the separate State of Oregon case, currently awaiting a decision from the Oregon Court of Appeals. The federal case includes both public trust doctrine and constitutional rights claims. The youth plaintiffs assert that by promoting fossil fuel production and greenhouse gas emissions, the government is violating their constitutional rights to life, liberty, and property, as well as the public trust doctrine. 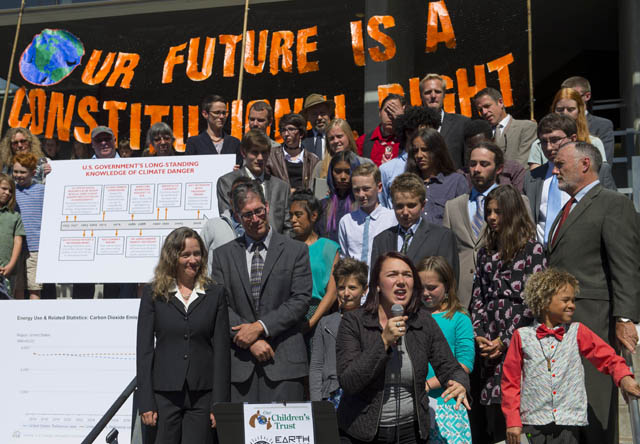 Youth plaintiff Kelsey Juliana speaks at a press conference on the steps of the Federal Courthouse in Eugene. Twenty-one youth plaintiffs are suing the federal government in an attempt to force science based action on climate change change. (Robin Loznak/ZUMAPRESS.com)

In support of the youth plaintiffs in the federal case, Crag now represents the League of Women Voters of Oregon and the League of Women Voters of the U.S. as amici, or friends of the court. The Leagues work to advocate for sound environmental policy and are focused on engaging citizens to participate in the democratic process to ensure that the interests of all Americans are represented. The Leagues generally work through the legislative and executive branches, but have occasionally joined in litigation in order to protect the voting rights of individuals or where fundamental rights of underrepresented groups have been adversely impacted. The Leagues’ participation in this case is to encourage the courts, in keeping with the separation of powers, to serve as a check and a balance to the legislative and executive branches, particularly where their actions have infringed upon the fundamental rights of individuals.

In November 2016, the youth survived motions to dismiss filed by the government and petroleum industry intervenors in a strong decision from Judge Ann Aiken. The youth’s lawsuit did not name the fossil fuel industry as defendants, but several industry groups sought to participate in the defense of the litigation, and were allowed to do so. But recently, rather than take a position on the science of climate change, those fossil fuel industry groups filed papers to withdraw from the case.

Currently the case is moving ahead to trial, but the government is taking action to stall the case. We are honored to be working side-by-side with these brave youth to demand climate justice and a sustainable future for generations of Americans. 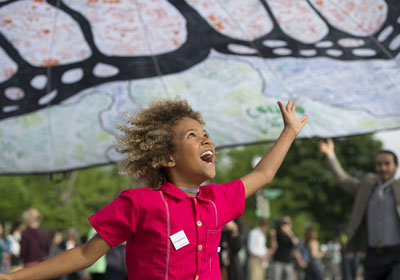 Youth plaintiff Levi Draheim plays under a colorful cloth on the sidewalk in front of the Supreme Court in Washington, D.C., before a a press conference. Draheim is one of 21 plaintiffs represented by Our Children’s Trust in a landmark federal lawsuit which accuses the federal government of violating their constitutional rights. (Robin Loznak)

Read more about the fossil fuel industry’s request to withdraw from the case: