The Winter Solstice – the darkest day of the year – is my favorite holiday.  It offers the opportunity to reflect on the darkness of the past four seasons, to embrace that darkness and all it has taught us, and to let the darkness go and quest for light and hope.  The solstice is this Thursday and the climate change news leading up to it has been dreary.

2011 topped the records for the number of extreme weather events costing more than 1 billion dollars – we had 12 such events in 2011 totaling almost $200 billion. NASA’s two latest climate reports contain mind boggling conclusions.  The first report uses conservative temperature data from the IPCC, and predicts that by 2100 around 40 percent of our major ecological communities – places like forests, tundra, and grasslands – will be dominated by a different ecological community.  In other words, if you live near a forest, it could become a desert by 2100, or if you live near tundra, it could be transformed into a grassland by 2100.  The second report, relying on paleoclimate data analyzed by top climate scientist Dr. Jim Hansen, paints a harsh reality of what even a two-degree average increase in temperature will mean for our planet. Closer to home and more specific to Oregon, a senior Department of Interior official warned a Congressional subcommittee about the impacts from climate change on the water supplies of western states that rely upon snowpack to provide fresh water.

So, that’s enough about the darkness – where’s the light?  It seems to be stemming from the next generation.  Youth leaders are stepping up all around our country, and the world, to express their concerns over climate change.  A young U.S. woman interrupted the latest climate change negotiations out of fear for her future putting the U.S. Congress and Administration on the spot for not moving the negotiations forward.  Youth in Canada danced in protest of their government’s decision to withdraw from the Kyoto Protocol.

Of course, youth here in Oregon and around the U.S. and the world took the courts last May to demand that the government protect their future from the harmful impacts of climate change. Led by Alec Loorz of Kids versus Global warming and Our Children’s Trust, these members of the next generation are also an amazing inspiration. 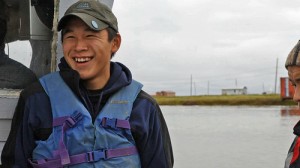 Our Children’s Trust, the iMatter Campaign, and Witness just released the most recent video of one such climate leader who is involved in a legal case launched last May.  Trust Alaska documents the life and struggles of Nelson Kanuk and native subsistence people along Alaska’s rapidly eroding coastline.  Nelson’s dedication to his family, their traditional way of life, and to sustaining the planet and his home is a true inspiration. Please share it with your friends and family, and may it help light the seasons to come.