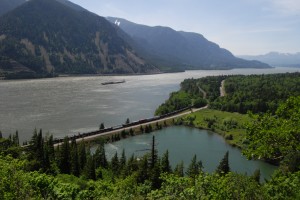 Crag and Earthjustice are working together to represent three conservation groups defending Oregon’s denial of a key permit for the proposed Morrow Pacific coal export facility.  Friends of the Columbia Gorge, Columbia Riverkeeper and the Sierra Club filed a petition today to participate in the Department of State Lands’ (DSL) administrative appeal process.  The conservation groups seek to defend Oregon’s decision against appeals filed by Australian-based Ambre Energy, the Port of Morrow, and the State of Wyoming.  As we reported last week, DSL rejected Wyoming’s appeal, finding that the state had not shown a right to participate.

“Oregonians and Northwest residents have spoken loud and clear: We oppose shipping hazardous coal through Oregon and along the Columbia River,” said Columbia Riverkeeper’s Brett VandenHeuvel.  Ambre’s Morrow Pacific project proposed transporting 8.8 million tons of coal by rail to the Columbia River in Boardman, loading the coal onto barges and shipping it through the Columbia River Gorge National Scenic Area to Port Westward, where it would be loaded onto ocean-going vessels.  The project would have doubled barge traffic on the river.

Ambre Energy initially submitted its application for a “removal-fill” permit in February 2012.  After 31 months of review, public input, and deadline extensions, DSL denied the permit.  The agency found that the project was not consistent with the “protection, conservation and best use of the state’s water resources, and that the applicant did not provide sufficient analysis of alternatives that would avoid construction of a new dock and impacts on tribal fisheries.”  Brett VandenHeuvel said, “The State of Oregon got it right when it denied Ambre Energy’s coal export project.  We’re prepared to defend the State’s decision to uphold laws that protect what we as Oregonians hold dear — clean water and fishable rivers.”  Crag is proud to be continuing our work to protect the Columbia River and the communities that depend on it.