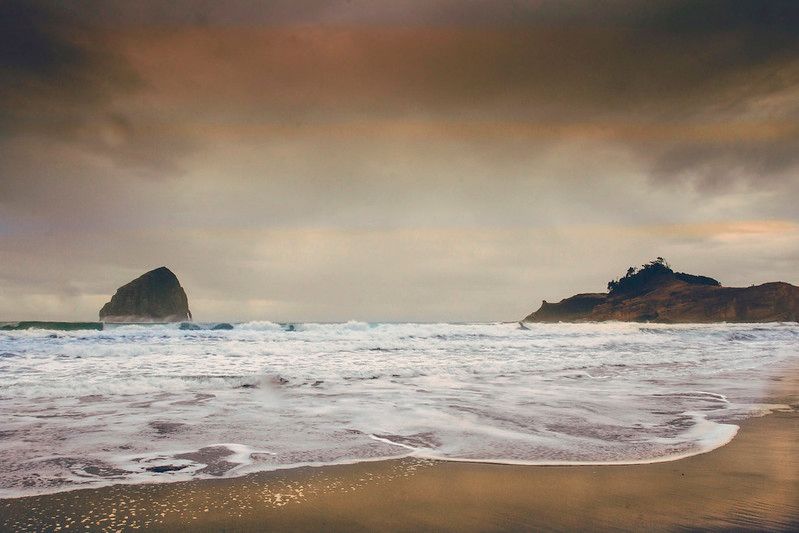 When driving down the wondrous Oregon coastline, you will encounter breathtaking views, salty breezes and many coastal communities. Over the past few years, however, you may have also  noticed an abundance of puzzling signs scattered throughout these scenic stretches of coastline.

At first glance, one may find this message slightly jarring, leaving one slightly confused without context. These signs, in fact, illustrate the bewildering story, beginning in 2019 when the tech giant, Facebook, arrived on the Oregon beaches of Tierra Del Mar.

From at least 2016, the State of Oregon has encouraged telecommunications companies to apply for use of the public’s shoreline as a landing site for trans-Pacific undersea cables and related on-shore operations. This encouragement has made Oregon a top west coast landing location for undersea cables, which support communications such as telephone, internet, and high-speed data. As of 2020, the Oregon Coast had at least seven trans-Pacific cable landings, four of which come ashore at a site owned by Tillamook County in Pacific City outside of residential areas. If sited and regulated appropriately, the installation and operation of undersea fiber optic cables can generally be performed safely and in a fashion that reduces conflicts with the public’s beach and minimizes impacts on vulnerable coastal habitats. However, given increasing demands on ocean resources, gaps in long-term planning, as well as lack of explicit environmental and public interest protections in Oregon’s governing legal frameworks, there are growing concerns about the impacts these industrial undersea cable projects will have and are currently having on Oregon’s nearshore waters, ocean shore, and seafloor areas as well as on public safety.

Facebook’s botched attempt in Spring 2020 to land a trans-Pacific telecommunications cable on the Oregon coast, and the ongoing problems arising from that disaster, shows what can happen when choices about where to site and construct these projects disregard the concerns of impacted communities and lack accountability for corporate applicants. In October 2018, Facebook purchased an undeveloped beachfront lot from Joey Harrington, a former NFL player and Oregon Ducks’ quarterback, for only $495,000. Soon after, the company submitted applications to Tillamook County and the state to use the property as the eastern terminus for a trans-oceanic fiber-optic cable, which would stretch more than 8,500 miles connecting data centers in the US to Asia. Unlike Oregon’s other cable landings, the purchased lot was residentially-zoned and located in Tierra Del Mar, a peaceful beach community (population 220) just south of the Sitka Sedge Natural Area and just north of Cape Kiwanda.

Facebook’s subsidiary company, Edge Cable, was tasked with overseeing the construction and operation of the project. As proposed, the cable would be installed by boring a hole beneath the shore using horizontal directional drilling (“HDD”) technology, starting on the residential lot in Tierra Del Mar and drilling under the beach to a location about a half-mile offshore, where it would emerge from the seafloor and connect with an existing trans-oceanic fiber optic cable. Given the location, the proposed construction of the cable had the potential to cause serious harm to sensitive coastal and nearshore ecosystems (through drilling accidents such as frac-outs), as well as harm the health, wellbeing, and livability of the quiet community of Tierra Del Mar.

Given these impacts, many local residents and community organizations in and surrounding Tierra Del Mar began to voice their concerns and campaign against Facebook’s project. Signs, including the one mentioned above, began to line the coastline roads to raise awareness and pressure county officials to deny Facebook Edge Cable the permits needed to move forward. After approval from the State Land Board, Facebook sought permission from the Tillamook County Commission. Facebook claimed that they were a utility, a provider of a public good similar to water or electricity. Despite overwhelming opposition from Tierra Del Mar residents, environmental organizations and coastal community members, the Tillamook Board of Commissioners approved Facebook’s request.

Construction was meant to start in June 2019 and finish by the end of November 2019, but continued into 2020. In April 2020, the concerns and fears of Tierra Del Mar’s residents came to fruition. On April 28, 2020, while drilling down into the seabed, Edge Cable’s crew smashed into a rock about 500 feet offshore. After the collision, Edge Cable abandoned their equipment at the bottom of the seafloor, including over 1,000 ft of steel drilling rods, a drill tip, tools for steering and tracking, and over 6,500 gallons of drilling lubricant. Facebook did not notify the state of the abandoned materials until June 17, 2020, almost two months later. Both the Oregon Parks and Recreation Department (OPRD) and Department of State Lands (agencies responsible for permitting cables)  have indicated that the delay in notification eliminated any potential options for recovery of the equipment. Facebook has not recovered this equipment, nor does it intend to do so in the future.

Crag, on behalf of our client, Oregon Shores, submitted public comments to the Oregon Parks and Recreation Commission and the Department of State Lands (DSL) regarding the drilling incident and Facebook Edge Cable’s pending application for a subsurface encroachment easement. A subsurface encroachment easement from DSL was required to allow Facebook to permanently abandon the machinery and equipment from its accident beneath the Oregon’s seafloor and beach. Crag and Oregon Shores joined conservation allies and community members to advocate for the denial of the Edge Cable encroachment easement, and to open the matter up for a public hearing and review. However, the State Land Board again approved Edge Cable’s application. Despite the accident and ongoing hazardous impacts (including frac outs and sinkholes), OPRD provided several extensions to Facebook’s original ocean shore permit to complete construction. The true extent of the environmental impact of this decision and the abandonment of Facebook Edge Cable’s machinery remains unknown.

DSL confirmed that Facebook finally wrapped up construction in September 2021. The project was roughly two years late and in addition to the drill break, included another massive leak of drilling fluid, a drone dispute, tons of broken abandoned equipment, and at least two sinkholes. Beyond paying DSL $250,000 for the breach of its original proprietary easement, Facebook has faced little accountability for its actions.

In response to the disastrous wreckage of Facebook’s cable project, Oregon passed  new legislation with requirements for undersea cable projects. HB 2603 as enrolled requires future undersea cable projects to submit plans that outline the installment and removal process of the cable. In addition to planning, the new law also includes financial guarantees to hold owners and operators of undersea cable projects financially responsible for their removal and for accident response. By increasing the standards and planning requirements, HB 2603 aims to prevent environmental disasters, like the Facebook Edge Cable, from occurring and protect Oregon’s beaches and seafloor.

The Surfrider Foundation led the charge in advocating for HB 2603 in Salem. After many months of public pressure and organizing, HB 2603 was signed into law by Governor Kate Brown on July 19, 2021. HB 2603 is a positive first step towards protecting Oregon’s beaches and coastal communities. With respect to permitting, HB 2603 requires detailed plans and cost estimates for the removal of cable equipment, and financial assurances from owners and operators to cover expenses related to restoring areas to their natural state. However, there is more work to be done.

After HB 2603 became law, the Department of Land Conservation and Development (DLCD) released their plans to implement the undersea legislation in their 2021-2023 Policy Agenda. In addition to new permit requirements, HB 2603 in fact specifically instructs the DLCD, in consultation with the Department of State Lands (DSL) and local and Tribal governments, to review Part Four of the Oregon’s Territorial Sea Plan (OTSP) related to the placement of undersea cables and provide the results to the Ocean Policy Advisory Council (OPAC). OPAC must then consider the review and develop recommendations for LCDC to amend Part Four of the TSP. Working with our client-partner, Oregon Shores, Crag submitted public comments to provide support and recommendations for several policies. Crag and Oregon Shores supported DLCD’s proposal to conduct the study in the biennium, and advocated for further updates to OTSP that would expand public participation, transparency, and siting standards. Crag and Oregon Shores believe that updating the OTSP is a crucial step in protecting our coastal environments, public safety and public interest in Oregon’s beaches, and will continue to work alongside coastal communities to ensure that Oregon’s coastal communities, ocean users, and ecosystems are protected from undersea cable abandonment and user conflicts.

Multiple mishaps and failures on the part of Facebook Edge Cable continue to cause a  tremendous amount of environmental harm. The drilling incident, abandonment of equipment and hazardous materials and failures of the Facebook Edge Cable project will continue to impact the surrounding coastal region for the foreseeable future, as the true extent of environmental implications and new consequences come to light.

Following the April 2020 drill break, construction on the project resumed. Soon after, in January 2021, there was another drilling “frac out” along the project route, where drilling fluid gushes back up a drill hole. Frac outs can cause damage to groundwater structures in an area where soils are porous, such as sandy beaches. In April 2021, a sinkhole was discovered on the public beach near the drilling site. Edge Cable filled in the sinkhole with sand. Shortly after the Facebook Edge Cable project was completed in September 2021, however, another sinkhole emerged. Sinkholes are an immediate danger to the public and compromise the safety of coastal public beaches. The U.S. Geological Survey notes any sinkhole can have a “dramatic effect” on the landscape and surrounding area as they tend to grow “slowly.”

In addition to sinkholes, new challenges are certain to arise from the aftermath of the Facebook Edge Cable project. It remains unclear what ecological impacts the hazardous material and abandoned equipment will produce. The Facebook Edge Cable project, therefore, illustrates the importance of protecting our vulnerable coastal environments and communities. Further regulations and legislation needs to be created, in order to prevent such disasters from occurring and to preserve public access to Oregon beaches.

The Coastal Law Project is a collaborative partnership formed in 2004 between the Oregon Shores Conservation Coalition and Crag Law Center to protect and preserve the Oregon coast and its ecosystems for all people. Through a range of tools including legal representation, public education about conservation laws and land use, and policy advice, the Coastal Law Project works with coastal communities to protect sensitive coastal and marine ecosystems, preserve and promote equitable public beach access, and defend coastal watersheds

Read more about about this issue in the media: