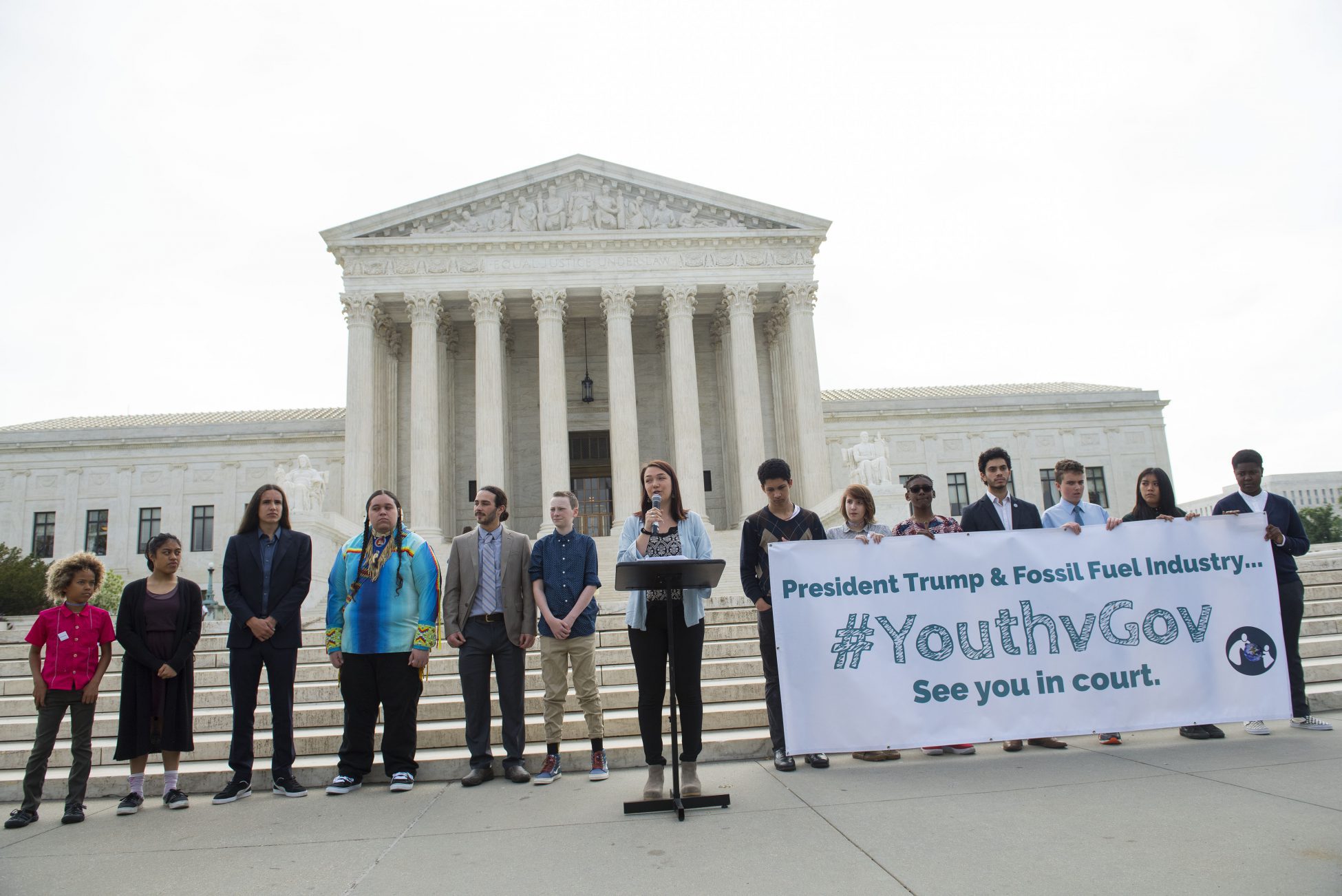 In 2015, a group of youth plaintiffs, including several Oregon youth, filed a lawsuit in the federal district court of Oregon asserting that through the U.S. government’s affirmative actions that cause climate change – promoting fossil fuel production and greenhouse gas emissions – it is violating their constitutional rights to life, liberty, and property. They also argue the government has breached the public trust doctrine, failing to protect and maintain our precious natural resources for public use.

Since 2011, Crag has been representing Oregon youth plaintiffs Kelsey Juliana and Ollie Chernaik in a lawsuit against the State of Oregon. Chernaik v. Brown asks that Oregon comply with its public trustee duty to reduce its share of carbon dioxide emissions in line with the scientific prescription to stabilize the global climate at carbon dioxide concentrations below 350 parts per million (ppm) by 2100. Read more about the Oregon case here.

Juliana v. United States is a fight for our country, our planet, and our future. Kelsey Juliana, a 23 year old from Oregon who we are representing as co-plaintiff in the Oregon Oregon climate case, is leading 21 youth plaintiffs from across the country in demanding climate action. Together, they are representing the voice of the next generation. The youth are fighting for everyone to have access to clean air, clean water, and a healthy climate. 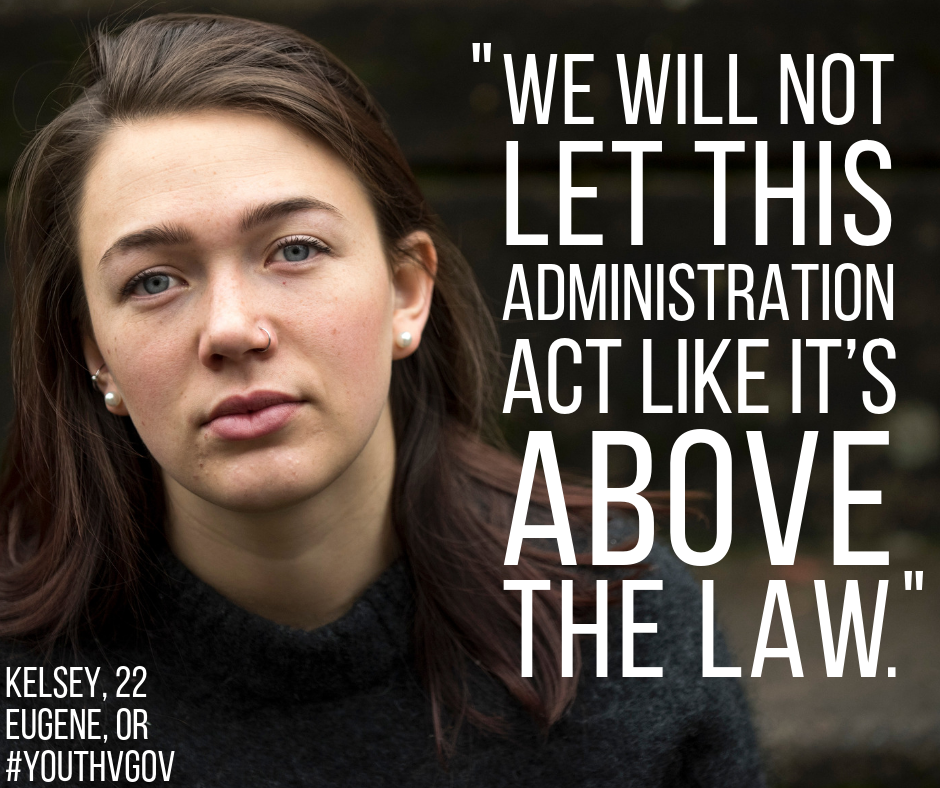 If successful, these young leaders will force the United States to ambitiously pursue a clean energy future: reducing harmful pollution, preserving delicate ecosystems, and protecting vulnerable populations. This case has enormous potential to forge a more sustainable United States, and the current Administration is doing everything it can to fight it. The government attempted to silence the voices of youth and prevent science from entering the courtroom. However, we believe everyone’s voice – no matter how young – must be heard, so we are advocating for Kelsey and her fellow young climate activists.

Youth filed their constitutional climate lawsuit, called Juliana v. United States, against the U.S. government in 2015. On November 10, 2016, U.S. District Court Judge Ann Aiken issued an historic opinion denying the motion to dismiss and holding that youth may have their day in court and take their case to trial.

The federal government sought an unusual intermediate intervention  from the Ninth Circuit Court of Appeals, known as a writ of mandamus. We filed an amicus brief in the Ninth Circuit on behalf of League of Women Voters of Oregon and League of Women Voters of the U.S. asking that the court deny the writ and allow the case to proceed to trial.On March 7, 2018, Chief Judge Sidney R. Thomas, writing for a unanimous three-judge panel of the Ninth Circuit Court of Appeals rejected the Trump administration’s “drastic and extraordinary” petition for writ of mandamus in the landmark climate lawsuit.

On February 8, 2019 the Juliana plaintiffs sought a court order preventing the federal government from issuing leases and mining permits for extracting coal on federal public lands, leases for offshore oil and gas exploration and extraction activities, and federal approvals for new fossil fuel infrastructure. To obtain the order, plaintiffs filed what’s called a motion for a preliminary injunction with the Ninth Circuit Court of Appeals while the government’s early appeal of the youths’ case is being heard.

On February 19, 2019 Zero Hour, a youth-led climate group, launched the website www.joinjuliana.org and announced its nationwide campaign to help thousands of young people add their names to the Young People’s amicus (“friend of the court”) brief in support of the young Juliana plaintiffs. 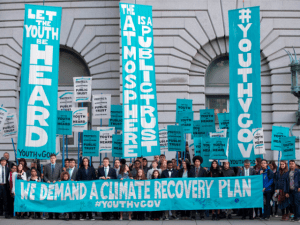 Youth plaintiffs and supporters outside the 9th Circuit Court of Appeals in San Francisco. Photo by Robin Loznak.

On March 1, 2019 Crag represented League of Women Voters along with other powerful voices of support for the Juliana v. United States youth plaintiffs and their landmark constitutional climate lawsuit, by filing an amicus curiae (“friend of the court”) brief with the Ninth Circuit Court of Appeals. In all, 15 amicus briefs, filed on behalf of a diverse set of supportive communities, including members of U.S. Congress, legal scholars, religious and women’s groups, businesses, historians, medical doctors, international lawyers, environmentalists, and more than 32,000 youth under the age of 25, displayed legal support for Juliana v. United States to proceed to trial.

On January 17th, 2020 the 9th Circuit Court of Appeals voted 2-1 to dismiss the case started by the brave youth suing the U.S. government over the climate crisis. Although the court found that the government has known about the dangers of climate change for decades, they “reluctantly” concluded that they could not force the government to address this climate crisis.

Judge Josephine Staton wrote a compelling dissent noting the devastating impact it will have on today’s youth. “As the last fifty years have made clear, telling plaintiffs that they must vindicate their rights to a habitable United States through the political branches will rightfully be perceived as telling them they have no recourse.” You can read the decision here.

The decision made by the 9th Circuit Court has not stopped the youth involved in this case. The energy from this trial has inspired other young people and community-based climate efforts all around the country. With the support of Crag, the League of Women Voters and many others, the youth are continuing their fight for justice and seeking a review from the full 9th Circuit Court.

On March 12, 2020 Crag filed another amicus brief in support of the Juliana v. U.S. plaintiffs on behalf of the League of Women Voters of (Oregon and National Chapters), and the National Children’s Campaign. The briefs urge the Ninth Circuit Court of Appeals to grant the young plaintiffs’ en banc petition and convene a new panel of 11 circuit court judges to review January’s ruling. The brief argues that the courts have a duty to protect the constitutional rights of young people from government-created climate disaster. For the courts to tell young people who cannot vote, to seek solutions from the elected branches of government violates our democratic system of checks and balances. Courts have a long history of declaring and protecting the rights of young people, and should do so here to protect children’s future.

On February 10, 2021 the Ninth Circuit failed to correct the legal errors in March 2020’s panel decision and upheld the panel’s ruling. A judge requested a vote on whether to rehear the case, but a majority of judges declined to do so.

On March 9, 2021, attorneys for the youth plaintiffs filed a motion to amend their complaint against the federal government and adjust the remedy sought in their case in response to the Ninth Circuit rulings.

On June 8, 2021 Attorneys General in 17 states filed a motion to intervene to insert themselves as adversaries to the Juliana lawsuit and object to any potential settlement between the Biden Administration and the youth plaintiffs. Because they had indicated they wouldn’t participate in the settlement process in good faith, the youth plaintiffs and their attorneys objected to these state governments intervening at this late stage in their case.

On June 25, 2021 attorneys for the youth plaintiffs and the Department of Justice presented oral arguments in front of U.S. District Court Judge Ann Aiken on the plaintiffs’ Motion for Leave to File Second Amended Complaint.

On July 7, 2021 Attorneys General in New York, Delaware, Hawai‘i, Minnesota, Oregon, and Vermont, as well as environmental organization NRDC, filed amicus briefs in support of the youth plaintiffs. Attorneys for the youth plaintiffs also filed a brief opposing the intervention motion of 18 Rebpulican states who seek to obstruct settlement negotiations and get the case dismissed.

Juliana (2015) is a partner case to Chernaik v. Brown (2011), the climate case against the State of Oregon that we presented to the Oregon Supreme Court in November (2019). Juliana involved federal Constitutional claims, while Chernaik is based on state public trust law. Chernaik v. Brown (2011) is still pending and will be decided in the coming months.

Juliana v. United States is one of many related legal actions brought by young people in several states and countries. Each case is supported by Our Children’s Trust, an organization elevating the voice of youth to secure the legal right to a stable climate and healthy atmosphere for the benefit of all present and future generations. As a friend of the court, we are supporting the League of Women Voters’ work advocating for sound environmental policy and engaging citizens to participate in the democratic process to ensure that the interests of all Americans are represented. The Leagues joined in the litigation to defend fundamental rights children who have are being adversely impacted by climate change.

Crag Executive Directory and Staff Attorney and Courtney Johnson is leading Crag’s work on this monumental case. She shared why this case is critical to our nation’s future.

“This administration has made clear that it will put the interests of Big Oil ahead of all others. These inspiring youth are standing up, on behalf of all of us, and demanding action to address climate change and secure health and prosperity for this and future generations. This case is so important because the courts can protect these kids’ rights where the political process has failed them.”

In Oregon, we are representing Kelsey Juliana and Ollie Chernaik, two brave youth from Eugene. The case is now on it’s way to the Oregon Supreme Court. We are honored to be working side-by-side with these brave youth to demand climate justice and a sustainable future for generations of Americans. Click here to learn more about this case and its implications for the health and future of Oregon.