Fish and Wildlife Management is not a Zero-Sum Game 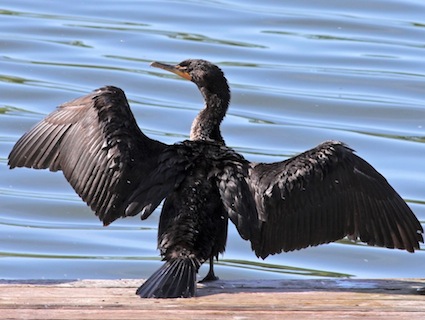 The U.S. Army Corps of Engineers recently proposed a plan to kill nearly 16,000 cormorants to limit the number of young salmon and steelhead the birds feed on as the fish pass through the mouth of the Columbia River.  According to the Corps, the birds have consumed about 18.5 million fish per year between 2011 and 2013.  It is safe to assume that killing cormorants will reduce the likelihood that a young salmon or steelhead will be eaten by a cormorant, but this plan begs the question of what unintended consequences arise when we attempt to “fix” problems in nature.  Is this an example of a sound management practice of a protected species, or instead an example of anthropogenic arrogance?

When rivers are managed to maximize economic values at the expense of fish and wildlife, it is no surprise that salmon and steelhead populations become threatened.  Instead of addressing the real issue of fish scarcity due to lack of suitable breeding grounds, the cormorant killings would follow the path of cheapest resistance.

Perhaps predictably, humans are directly and indirectly responsible for the dense cormorant population that feeds on the steelhead and salmon at the mouth of the Columbia River.  Cormorants flocked to the sand spit they’ve now made their home after being hazed and driven from other habitat.  As natural habitat is destroyed, the logical outgrowth is a concentration of the population in the remaining available habitat.  The cormorants are not the problem; they are only a symptom.

Crag and our clients are focused on addressing the actual problem – rivers that are no longer suitable for salmon and steelhead.  For example, Crag continues to work with clients on aiding the recovery of the White Salmon River after the Condit dam was removed by protecting the ecologically-sensitive river banks from development.  The Hemlock Dam removal was challenged in 2009 and Crag intervened to help defeat the challenge and ensure the dam removal process continued.  The dam was ultimately removed and fish returned to the reaches above the former dam site.  In addition to the removal of dams, Crag also represents clients who seek to protect water quality in our streams and rivers.  These projects create real, lasting change that benefit both the fish and the birds that feed on them.

Will Carlon is from Chico, California and attends the University of Oregon School of Law.  He is currently working as a summer associate at Crag Law Center and is focused on water quality and land use issues.