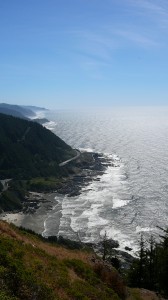 Our Ocean, a coalition of conservation groups in Oregon, including Crag clients Oregon Shores Conservation Coalition and Surfrider, has been working for years to set aside small areas of the State’s ocean waters for a network of marine reserves and protected areas.  Last week, legislation that would formally adopt the recommendations for reserves and protected areas at Cape Falcon, Cascade Head, and Cape Perpetua, passed out of committee.  Yesterday, the Oregon Senate passed the bill by a vote of 25-5, sending the bill on to the House.

Marine reserves can help increase the abundance, size, and diversity of marine life, including commercially important fish stocks, by restricting fishing and other resource extraction activities within the protected areas.  Studies show that marine reserves and protected areas have the greatest benefit when part of a network. The three marine reserves at issue in this bill would add to the existing pilot sites at Otter Rock on the central coast near Lincoln City and Redfish Rocks on the southern coast near Port Orford.  The addition of Marine Reserves at Cape Falcon north of Manzanita on the north coast, Cascade Head north of Lincoln City, and Cape Perpetua between Newport and Lincoln City, is a critical step to making the marine reserves network a success.

Oregon’s marine reserves process has been largely stakeholder-driven, with the recent recommendations for the three new marine reserves resulting from many, many hours of volunteer work by stakeholders to study, consider, debate and discuss the location of marine reserves large enough to be ecologically significant but small enough to avoid harmful social or economic impacts.  When the Senate passed this bill, it affirmed trust in that process and in the community members who worked tirelessly to achieve the compromise that allowed these marine reserves to move forward.  Here’s hoping the members of Oregon’s House of Representatives will see the same value and act to validate the work of these stakeholder groups to protect Oregon’s coastal waters and marine life for the next generation.