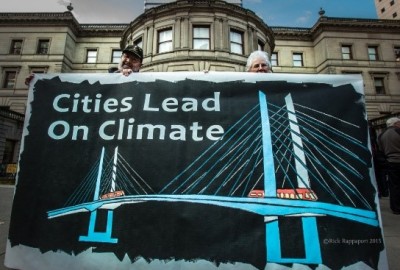 July 31, 2018 (Portland, Ore.) –– Today a coalition of public interest groups celebrated news that opponents to Portland’s fossil fuel ordinance have failed in their efforts to overturn the City’s landmark law. In 2016, Portland’s City Council voted unanimously to prohibit new fossil fuel infrastructure such as oil and gas terminals. Last week, the Oregon Supreme Court declined to review a January 2018 ruling by the Oregon Court of Appeals that upheld the Constitutionality of Portland’s Fossil Fuel Terminal Zoning Amendments, dealing another blow to the legal challenges brought by the Portland Business Alliance and the oil industry.

Oregon Physicians for Social Responsibility, Audubon Society of Portland, the Center for Sustainable Economy, and Columbia Riverkeeper intervened in the case and welcomed the news that Portland’s fossil fuel policy can move forward. The groups were represented by Crag Law Center, a nonprofit public interest environmental law organization.

“This is a major victory for the climate and our communities,” said Maura Fahey, Staff Attorney at Crag Law Center. “Industry couldn’t even get its foot in the door of the courtroom to try to overturn the City’s landmark law. This sends a powerful message to local communities that now is the time to take action to protect our future.”

“People in Portland fight to defend what we love from dirty fossil fuel projects like oil train terminals,” states Dan Serres, Conservation Director for Columbia Riverkeeper. “The City of Portland made history when it adopted the fossil fuel ordinance. With these challenges from the oil industry and the Portland Business Alliance out of the way, Portland can move forward toward putting this policy into practice.”

In January the Oregon Court of Appeals reversed, in large part, a Land Use Board of Appeals (LUBA) decision that had invalidated Portland’s landmark Fossil Fuel Terminal Zoning Amendments. The Appeals Court ruled that Portland’s code did not violate the Dormant Commerce Clause of the U.S. Constitution and that it is a legitimate exercise of government authority to act to protect the health and safety of Portland residents from the dangers of the fossil fuel industry.

“We’re thrilled. The courts have affirmed that Portland and other communities can implement innovative protections to counter threats to human health and safety from dangerous fossil fuel infrastructure, ” stated Regna Merritt of Oregon Physicians for Social Responsibility.

“This is an important signal to other local governments that they can protect their residents from the many dangers of the fossil fuel industry,” said Nicholas Caleb, the Staff Attorney at the Center for Sustainable Economy. “This precedent will allow much greater creativity from cities and counties that want to create safe, healthy, and sustainable communities for their residents.”

“This decision sends an important message at a time when our federal government is dropping the ball on climate change that cities can and will lead,” said Bob Sallinger, Conservation Director at Portland Audubon Society. “Hopefully the Portland Business Alliance gets the message that it is time to become part of the environmental movement in Portland rather than a perpetual obstacle to it.”