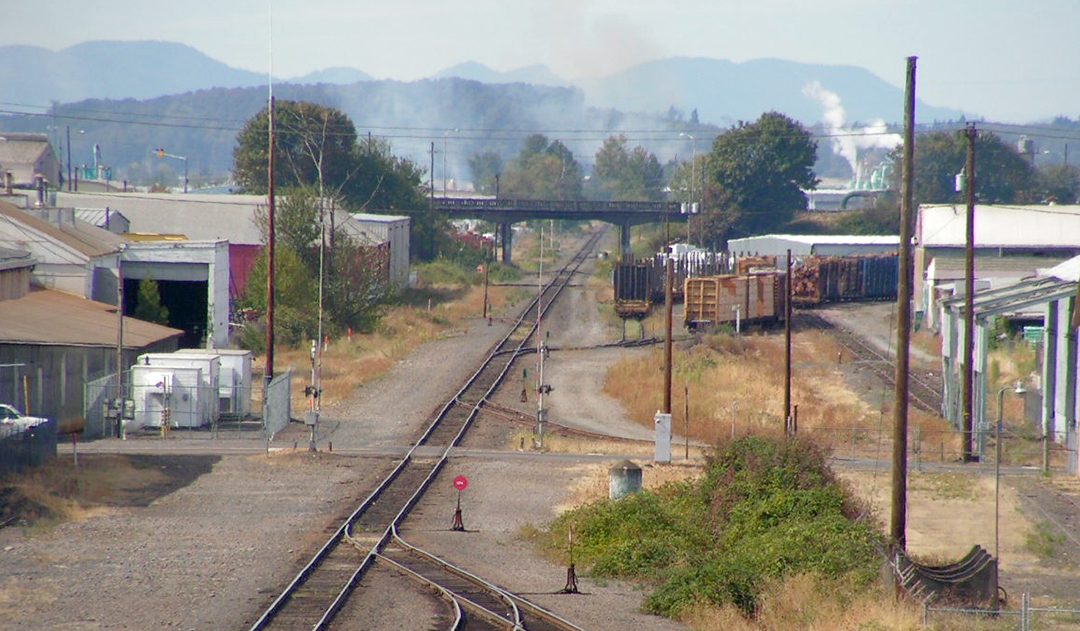 Air pollution in West Eugene from JH Baxter. Image sourced from our client, Beyond Toxics.

After over a decade of public pressure and legal action, JH Baxter announced that they would shut down operations on January 31st, 2022. JH Baxter is a producer of creosote-treated wood products, such as railroad ties and telephone poles, in Eugene, Oregon. JH Baxter has a history of environmental violations and, for this reason, the Oregon Department of Environmental Quality (DEQ) designated them as a “significant non-complier.” West Eugene, where the facility is located, is home to many low-income and Latino residents and experiences disproportionate levels of environmental harm.

JH Baxter’s production process involved multiple chemicals known to have adverse effects on human health, including creosote, pentachlorophenol, Ammoniacal Cooper Zinc Arsenate, and others. In 2021, the DEQ notified JH Baxter that they had accrued over $200,000 in penalties for multiple violations of state and federal environmental laws. The most significant violation was JHB’s unpermitted treatment of 1.7 million gallons of  hazardous waste. JHB’s wastewater evaporator was not working, so it overrode the pollution controls of retorts meant for treating wood and evaporated its untreated process wastewater. The violations also include illegally discharging untreated  stormwater, and several other stormwater and hazardous waste handling violations. JH Baxter appealed DEQ’s penalty notice before the Oregon Office of Administrative Hearings.

On behalf of our clients, Beyond Toxics, Crag filed a petition to request party status seeking to  participate in the proceedings to represent the interests of our clients and the impacted community. Beyond Toxics is a statewide environmental justice organization that advocates for communities that are disproportionately impacted by pollution and climate change. DEQ granted Beyond Toxics limited party status in the case, which is set to proceed to a hearing in May 2022.

JH Baxter’s multiple violations of state and federal law resulted in hazardous waste polluting the surrounding region and significant impacts to community health. The nauseating smell of creosote and naphthalene from JH Baxter have become all too familiar to the residents of West Eugene. In a survey conducted by Beyond Toxics to over 300 residents, the majority of people reported that they experienced daily impacts of this air pollution. Impacts reported by residents included nausea, eye-burning, and other symptoms of exposure from chemicals in creosote vapors. Aside from these daily symptoms, exposure to air pollution also increases one’s susceptibility to chronic conditions, including cancer, asthma, hypertension, and diabetes.

For over a decade, Crag and Beyond Toxics have been pursuing environmental justice in West Eugene by fighting polluters like JH Baxter and Seneca Sustainable Energy. West Eugene is an environmental justice community that has a high percentage of low-income and Latino residents and has historically been exposed to disproportionate levels of environmental harm. Crag and Beyond Toxic aim to center community voices and ensure that JH Baxter is held accountable for its actions.

Beyond Toxics – Beyond Toxics is a statewide environmental justice organization advancing policies that ensure meaningful participation and cultivating grassroots leadership from Oregon’s frontline and impacted communities. Established in 2001, they are a multicultural, inter-generational team dedicated to centering community leaders and building out the true diversity of our state’s vibrant Environmental Justice movement.

Read the official Press Release from Beyond Toxics, January 26, 2022

Read more about our previous Victory!