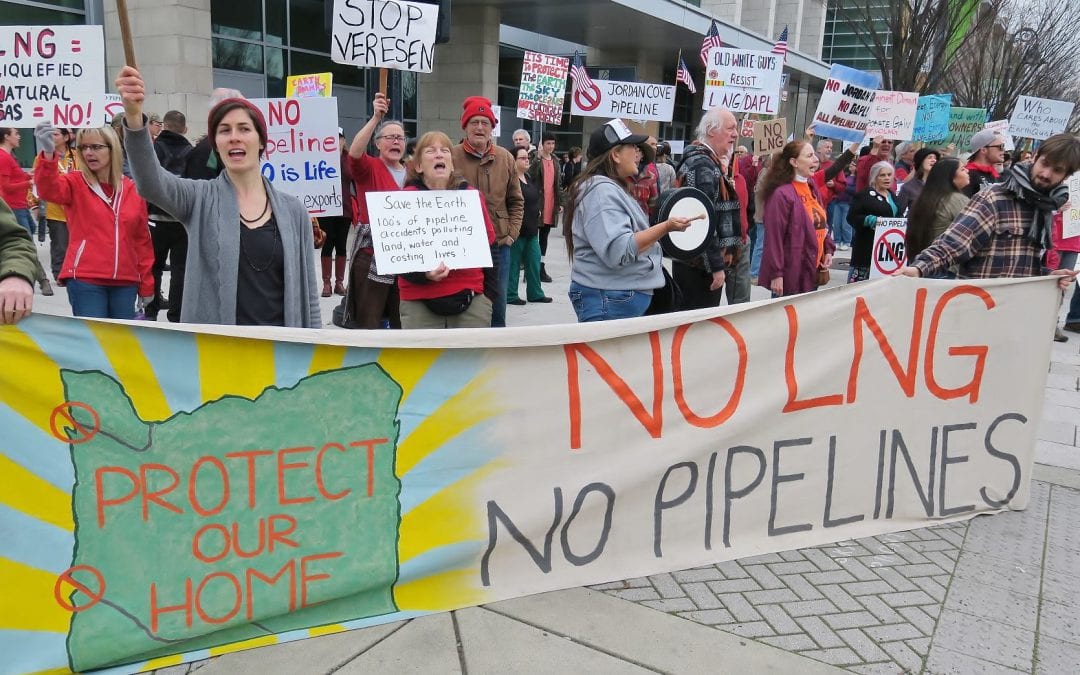 On November 27, 2017, Crag and our client Oregon Shores Conservation Coalition secured another major victory in the long running fight against fossil fuel infrastructure in Oregon. The Oregon Land Use Board of Appeals (LUBA) issued a unanimous decision rejecting Coos County’s approval of land use permits for the Jordan Cove Energy Project liquefied natural gas (LNG) terminal proposed to be constructed in Coos Bay.

Many project opponents were dismayed that we even had to continue this land use challenge. That’s because in 2016, the Federal Energy Regulatory Commission (FERC) denied necessary applications for the pipeline and LNG terminal. FERC understood that the potential public benefits of the Jordan Cove LNG project would not outweigh the potential for adverse impacts along the pipeline route. This land use application was under review when FERC denied the federal applications. Nevertheless, the corporation did not withdraw its land use applications, which included a promise to obtain federal permits to ensure compliance with some local land use laws. Coos County went on to approve the local permits, despite FERC’s denial.

In rejecting the land use permits, LUBA found that the County could not rely on the applicant to obtain FERC permits to ensure compliance with local land use codes when FERC had already denied the permits. LUBA also found multiple errors in how the local government evaluated the proposal and applied the land use laws. LUBA held that the County did not properly consider whether the project would have a substantial public benefit that could justify the project’s significant impacts to the Coos Bay estuary, or how the project would impact public trust resources in the estuary including commercial and recreational fisheries and access to shellfish beds. LUBA also rejected the County’s analysis that disregarded potential adverse impacts to the shore areas from construction of the marine terminal and failed to adequately explain how impacts to wetlands would be mitigated. And in response to arguments presented by the Confederated Tribes of Coos, Lower Umpqua, and Siuslaw Indians, LUBA issued a strong statement regarding the requirements to include input of local Tribes during the land use review process.

This marks the third major land use victory Crag has secured on behalf of clients and coalition members against LNG terminals in Oregon. In 2010, we helped Columbia Riverkeeper defeat the Bradwood Landing LNG proposal through LUBA and the Oregon Court of Appeals. And in 2016, Crag worked with both Columbia Riverkeeper and Oregon Shores to defeat the Warrenton LNG export project through the local land use proceedings.

These fossil fuel infrastructure projects are enormous, requiring a multitude of local, state, and federal permits. Crag has worked as part of a diverse coalition of conservation groups, Tribes, and local landowners to fight against the development of pipelines and export terminals that would not only re-shape the landscape (the proposed pipeline would impact over 200 waterways), but also continue to lock us into a dirty energy economy. This project would have the capacity to produce six million metric tons of liquefied natural gas and 30 million tons of carbon dioxide equivalent per year. If Oregon is to meet its greenhouse gas reduction goals, this type of project cannot be part of the plan. This victory is one more step towards ensuring our sustainable future.