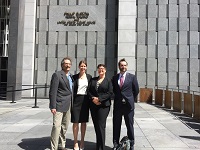 The groups argued that USDA had unlawfully changed organic regulations to create a new pesticide loophole without first undertaking a formal rulemaking and allowing the public to participate in any such decision. On Monday, Judge Corley of the U.S. Federal Court for the Northern District of California agreed, ruling that USDA’s National Organic Program (NOP) violated the law when it issued what it called a “guidance” that weakened the long-standing prohibition on synthetic pesticides in organic compost, and struck it down.

The guidance created by the USDA allowed the use of greenwaste (such as lawn clippings) that is treated with pesticides in organic compost, thus violating the NOP’s regulation that compost shall not contain synthetic substances.

The groups challenged the guidance because it fundamentally undermined the long-standing prohibition of synthetic pesticide contaminants in compost.  After finding that the USDA violated the law, the Court struck the guidance, thus industry can no longer sell or use contaminated compost in organic food production.  Read more background on the case.

Crag and the organic watchdog nonprofits we represented lauded the victory:

“Organic consumers expect the products they buy to be safe and not harmful to the earth. Citizens brought this suit to force the government to abide by the laws designed to ensure the integrity of our nation’s organic production and certification system,” said Ralph Bloemers, staff attorney for the Crag Law Center and counsel for the plaintiffs.

“The court’s decision upholds the integrity of the organic standard and is an incredible victory for organic consumers, organic farmers and the environment. On the flipside, the decision is a resounding defeat of industrial food actors trying to sell out organic integrity to pad their own pocketbooks,” said senior CFS attorney George Kimbrell, counsel for the plaintiffs.

“The court decision upholds an organic industry that has been built on a foundation of consumer and farmer investment in ecologically sound practices, principles, and values to protect health and the environment,” said Jay Feldman, executive director of Beyond Pesticides.

“We applaud the Court’s decision to protect the integrity of the organic program. We will continue to watchdog the USDA to ensure that the program meets consumers’ expectations for meaningful organic standards,” said Caroline Cox, Research Director of Center for Environmental Health.

The case was handled by staff attorneys Ralph Bloemers and Maura Fahey for Crag Law Center, along with co-counsel from Center for Food Safety. Crag is a non-profit law firm that provides legal aid for the environment by representing non-profit organizations and community groups seeking to safeguard the environment and enforce environmental law.

Jordan Bollmann is a senior at Duke University, who interned with Crag via the DukeEngage Program during the summer of 2016.