The Klamath Basin, spanning southern Oregon and northern California, contains five National Wildlife Refuges established to protect fish, wildlife, and waterfowl habitat. The Klamath Refuges serve as some of the most important bird habitat in North America with nearly 80 percent of migrating waterfowl in the Pacific Flyway relying on the refuges for rest and refuel during migration, assisting more than 260 species of birds. Unfortunately, the refuges have been severely damaged and degraded from competing commercial agricultural uses over the last century. Excessive water withdrawals and farming pressures have resulted in much of the historic wetlands in the Basin being drained.

Crag is representing a coalition of conservation groups in seeking long-range planning and protection for these critical National Wildlife Refuges. We have filed complaints in Federal Court on behalf of Audubon Society of Portland, Oregon Wild, and WaterWatch of Oregon against the U.S. Fish and Wildlife Service for failing to produce the long-overdue management plan and failing to follow federal law in its creation, neglecting the ongoing water crisis facing waterfowl on the refuges.

The Klamath Wetland Complex once encompassed more than 350,000 acres but today it has been reduced to 80,000 acres to make way for commercial agriculture. Lower Klamath and Tule Lake National Wildlife Refuges are unique in the nation in that they lease more than 22,000 acres of refuge lands to private agribusiness interests. Lands set aside by law as wetlands for ducks and geese are instead managed for commercial agriculture. For over a century, migratory birds have endured their wetlands being drained and replaced with agribusiness farmland. These farms allow the use of toxic pesticides and oversee the wholesale destruction of birds in their nests each spring.

The Klamath Basin is in a perpetual state of drought, lacking necessary water resources for birds to survive. In recent years, federal water management decisions by the Department of the Interior have bolstered commercial agriculture at the dire expense of waterfowl. Water for wetlands has been cut off repeatedly in recent years, depriving birds of adequate space to rest and feed, sparking outbreaks of avian botulism and other diseases that have killed tens of thousands of migratory birds. Bald eagles, sandhill cranes, white pelicans, and hundreds of other bird species rely on the wetlands and wildlife areas on refuges in the Klamath Basin for their survival. Yet, resources continue to be diverted away from those who need it most. 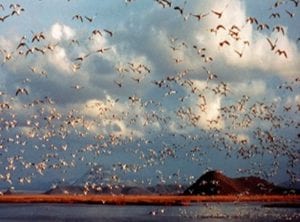 The National Wildlife Refuge System Improvement Act of 1997 requires that the U.S. Fish and Wildlife Service develop and implement a “comprehensive conservation plan” (CCP) for each unit within the national wildlife refuge system. The CCP describes desired future conditions and provides long-range guidance and management direction to achieve the purposes of the refuge and ensure commercial activities on refuge lands do not undermine wildlife conservation.

The U.S. Fish and Wildlife Service violated the law by failing to complete the CCP for multiple years after the deadline, and once the plan was developed after our lawsuit, it again failed to comply with the law in abiding by the refuge’s stated purpose.

We are committed to ensuring the U.S. Fish and Wildlife Service follows the law, transfers adequate water supply to birds which are dying without it, and examine whether commercial agriculture is compatible with wildlife conservation on National Wildlife Refuges.

In April 2014, we filed a complaint in Federal Court on behalf of Audubon Society of Portland, Oregon Wild, and WaterWatch of Oregon against the U.S. Fish and Wildlife Service for failure to develop and implement Comprehensive Conservation Plans (CCP) for each Klamath Basin National Wildlife Refuge under the National Wildlife Refuge Act. The Plans were due to be completed in October 2012. They require long-range management of the refuges and would assess compatibility of competing uses with the conservation purposes of the Refuges. The litigation was aimed at holding the federal agency accountable for violating its mandatory duty seeking a definite and enforceable deadline for developing and implementing the Plans.

In March 2015, a US District Court Judge issued a preliminary finding ordering the US Fish and Wildlife Service to complete the long overdue CCPs by Aug. 1, 2016. Preceding another difficult drought season, the completed plans would provide an important tool to ensure that in drought years commercial activities on the refuges do not harm fish and wildlife conservation. The following month, this ruling was affirmed by a second District Court Judge, ensuring the CCPs would be produced by the new deadline.

However, the U.S. Fish and Wildlife Service failed to follow federal law in the creation of the CCP for the Klamath Basin National Wildlife Refuge Complex. In January 2017, we filed a suit in federal court against the agency for neglecting to resolve the ongoing water crisis facing the refuges causing massive waterfowl die-offs. The complaint alleges that the plan fails to meet the purposes of the Klamath Basin Refuges to provide diverse habitats for migrating birds and wildlife. The CCP ignores the implications of more frequent drought and climatic changes on refuge wetlands and the impacts that commercial agriculture has on wildlife, water quality, and diversion of limited water resources away from wetland habitats.

We presented argument before the Oregon federal court in January 2019. Unfortunatley, the court denied our claims and ruled in favor of the government, finding that the U.S. Fish & Wildlife Service had satisfied its management obligations on the Refuges, despite severe water shortages and ongoing conflicts between wildlife conservation and private commercial agriculture on these public refuge lands that support millions of migratory waterfowl each year. In June 2020, we filed an appeal on behalf of our clients before the Ninth Circuit Court of Appeals. We are currently in the process of briefing and expect to present argument to the Court in late 2021. Read our opening brief here.

For five years, we have proudly represented Audubon Society of Portland, Oregon Wild, and WaterWatch to preserve fish, wildlife, and waterfowl habitat. This coalition of conservation groups advocates for the protection and integrity of National Wildlife Refuges in the Klamath Basin.

Maura Fahey and Chris Winter are leading our work in the Klamath Basin. Staff Attorney Maura Fahey shared the importance of this case.

“If the Klamath Basin is going to continue to serve as a vital point for millions of birds along the Pacific Flyway, something needs to change in how the government manages the Refuges. We are working to make sure that happens.” 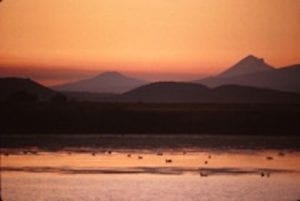