Gold prices recently skyrocketed, causing a corresponding increase in the number of claims for gold 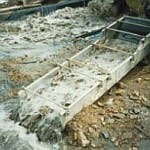 mines.  One such proposed mining project in the Klamath National Forest in northern California would have drawn significant amounts of water from McNeal Creek, a key watershed for federally protected fish species.  This project was recently canceled by the Forest Service.  While not a victory, this decision does help native fish and the fishermen and native peoples who depend on them.

The Crag Law Center was contacted by Klamath Siskiyou Wildlands Center, Klamath Riverkeeper, Environmental Protection Information Center and Klamath Forest Alliance to help prepare a challenge to the US Forest Service’s decision to authorize a placer gold mine in the Klamath National Forest.  The proponents of the mine had hired a consultant to conduct an environmental assessment who found that the mine would not cause any significant environmental impacts.

However, we worked with our clients to carefully review the proposal and we determined that the mine would have drawn significant amounts of water from McNeal Creek as part of the operation.  Although the assessment claimed that only 2% of the creek’s water would be drawn off at any time, the assessment based this figure on measurements taken during high stream flows even though the mine would be operating year-round.  During low flows, a much higher percentage of the water would have been consumed, threatening aquatic wildlife that depends on the creek.

In addition, the mine’s consultant never set forth the existing condition of the area and offered no comparison against which to measure the impacts of the project.  Under federal law, the Forest Service must consider a baseline against which the proposed action can be compared so the decision makers and the public can accurately weigh the costs and benefits.

The Crag Law Center worked with these local organizations to prepare and file an administrative appeal of the project.  This summer, the Forest Service decided to back away from the ill-conceived plan and not implement the decision.  When our clients contacted the Forest Service, an official stated that they had canceled the plan because they felt it could not withstand a legal challenge. This is not likely to be the last we hear of this plan and we will continue to work with local citizens to ensure that the public interest in fish, wildlife and water supplies is protected.