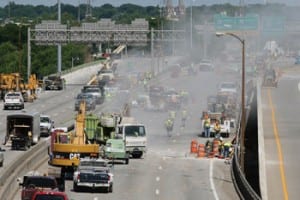 On July 2, 2012 the Crag Law Center and Organizing People-Activating Communities (OPAL) launched a lawsuit challenging the Columbia River Crossing project on behalf of an environmental justice community living on Hayden Island. Local citizens living in the low-income community are challenging the controversial, $3.6 billion project to protect the air quality, livability, and emergency services in their neighborhood.

The lawsuit, filed in federal court in Portland, Oregon, alleges that the federal government failed to disclose the numerous and widespread impacts on this vulnerable community, which includes many elderly people living in manufactured homes who do not have independent transportation. The project has been a lightning rod for criticism in the Portland Metro area and would result in more than six years of construction-related impacts on this small neighborhood. As one of three sites where major construction activities will take place and where two highway interchanges will be built, Hayden Island stands to suffer some of the most severe effects of this behemoth construction project. Crag and OPAL are teaming up to protect the interests of the Hayden Island manufactured home community and to ensure that their concerns are not swept under the rug by the federal government.