On behalf of five environmental groups, Crag this week filed suit against the U.S. Forest Service and U.S. Army Corps of Engineers in federal district court to force supplemental analysis on the environmental consequences of the Ketchikan-to-Shelter-Cove road project on Revillagigedo Island in southeastern Alaska.

The lawsuit challenges the Forest Service’s recent approval of a right-of-way easement for a one-mile segment of the road that would cross national forest land, and the Army Corps of Engineers’ issuance of a wetland fill permit, which allows seven miles of road (including the national forest segment) to be built. The rest of the construction would be on state land. 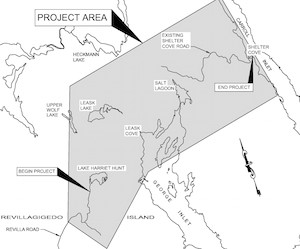 The road construction would connect Ketchikan to about 53 miles of existing logging roads in the Saddle Lakes area. That region already has a very high road density of nearly two miles of road per square mile; local wildlife populations are already stressed from about 18,000 acres of clearcut logging over the past two decades.

“At issue is the connection of Ketchikan to the presently isolated area beyond George Inlet, which has an existing high density of logging roads,” said Larry Edwards of Greenpeace. “Making road connections from communities to areas that have a high road density is known to pose a threat to the sustainability of populations of Alexander Archipelago wolves, marten and other sensitive wildlife species due to increased hunting and trapping pressure, including poaching.”

The 7.3-mile, one-lane gravel road link would be built by the State of Alaska, which put it out for bids March 14. The expected cost is $19 million, and $21 million is budgeted. The construction would extend eastward from the existing White River Road, which now ends at Leask Creek. It would proceed to Salt Lagoon, at the head of George Inlet, and then northward. The north end would connect to an existing logging road that goes eastward to Shelter Cove, on Carroll Inlet.

“The federal agencies did not follow federal law to consider hunting and trapping pressure, wildlife disturbance and user conflicts that the road connection will cause,” said Gabe Scott of Cascadia Wildlands. “It is important that the agencies go back to the drawing board to ensure that wildlife, hunters and recreational users are fully considered.”

The suit has no effect on road access from Ketchikan to upper George Inlet or on the potential for a boat launch ramp and dock somewhere along the inlet’s shore between the White River and Leask Creek.

“Plowing forward with this road connection before determining the consequences of doing so has the process entirely backward,” said Dune Lankard, the Center for Biological Diversity’s representative in Alaska. “This project is part of the logging industry’s grand scheme to access old-growth forests that we’re determined to protect.”

The plaintiffs are the Greater Southeast Alaska Conservation Community, Cascadia Wildlands, Greenpeace, Center for Biological Diversity and The Boat Company.