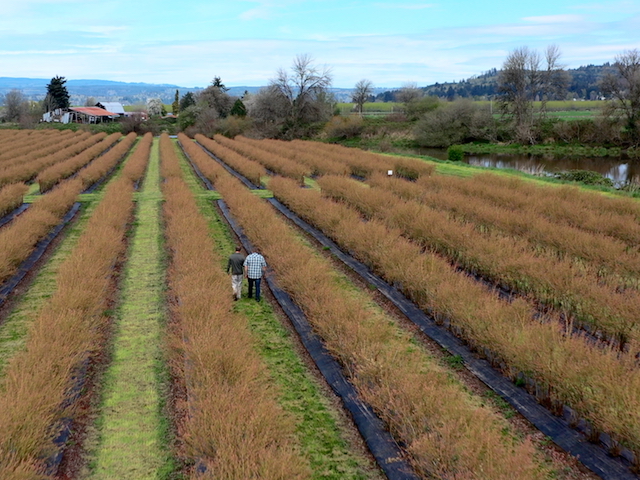 “Columbia County Port Commissioners plan to turn hundreds of acres of high-value farmland into an industrial plant that will pollute the air, pollute the Columbia River, and destroy successful businesses. The land they seek to utilize and take has been farmed for generations. The impacts from this will shut down one of Oregon’s last remaining mint farmers, two of Oregon’s beloved local blueberry farmers, and one woman-owned grass-fed cattle ranch, among the almost 40 farms affected.”

“Paving over some of the highest quality farm lands in Oregon for dirty fossil fuel development undermines communities’ hard work to tackle the climate crisis and protect family farms,” said Dan Serres, conservation director for Columbia Riverkeeper. “This rezone also impacts lynchpin salmon habitat. Billions of dollars have been invested in salmon restoration. Adding another industrial port on the scale of the Port of Vancouver in the Columbia River Estuary flies in the face of common sense.”

Over 1,000 people, including local farmers, business owners, and people that live along the rail lines that would service the rezoned site, submitted testimony to the Columbia County Board of Commissioners, urging the board to reject the port’s latest rezone proposal.

Proposed as a potential energy hub, the port has failed in multiple attempts to industrialize a sensitive tract of low-lying, diked farmlands and wetlands for fossil fuel refineries and terminals.

In 2019 the Oregon Court of Appeals upheld the Oregon Land Use Board of Appeals’ and ruled that Columbia County ignored Oregon law when it doubled the size of Port Westward.

“Over 830 acres of valuable farmland that produce high-value crops like mint and blueberries are at risk with this rezoning effort. Once farmland is gone, it’s nearly impossible to get back,” said Mary Kyle McCurdy, Deputy Director of 1000 Friends of Oregon. “Simply put, what Columbia County is trying to do is at odds with protecting Oregon’s working lands and mitigating climate change. The Port has had 7 years to demonstrate that their proposed industrial uses would be compatible with existing uses, and they’ve failed to deliver.”

Port Westward is ground zero for a string of controversial fossil fuel developments, including fracked gas, coal, and oil terminals. Examples include:

“The Port’s plan is absurd and immoral. I live on a route for heavy diesel trucks (they drive through areas with unstable soils) for a potentially massive construction site at Port Westward. The projects at Port Westward would create pollution and exacerbate hazardous road conditions for months if not years,” said Darrel Whipple, a resident of Alston and member of community group Envision Columbia County. “And these impacts pale in comparison to the concerns of local farmers in the Beaver Drainage District who fear being flooded out by the so-called mitigation projects proposed for this industrialization.”

Crag submitted detailed comments on behalf of Columbia Riverkeeper and 1000 Friends of Oregon describing how the port’s proposal failed to meet the minimum requirements of Oregon’s land use laws. Oregon law allows for appeals to the Oregon Land Use Board of Appeals, which would likely issue a decision in several months.

Read more on the history of this ongoing fight.