Letter from the Tongass

In 1879 on his first trip to Southeast Alaska in what is now the Tongass National Forest, naturalist and wilderness lover John Muir was overcome by the dramatic landscape. He first witnessed the region from aboard a passenger ship, sailing through the island archipelago. “Never before this have I been so embosomed in scenery that is so helplessly without description,” he wrote in his seminal Travels in Alaska.

I recently traveled to the Tongass to see first-hand this dramatic beauty, but also, to witness the impact of decades of clear-cut logging of the old-growth coastal rainforest on our national forestland. My companions were representatives from Cascadia Wildlands and Greenpeace, and a professional cinematographer from LA. Our mission was to capture on camera the stark dichotomy of the landscape, so that we can share the story of the Tongass—America’s largest national forest—with a wider audience. 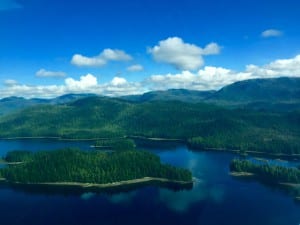 On the ferry ride from Ketchikan to Prince of Wales Island, I experienced a very different picture than John Muir. The stunning beauty of the place is ever-present. There are islands in every direction—seemingly “sown broadcast” to Muir. Dark-green forests of old-growth spruce, hemlock, and cedar unfold like a carpet of green from high on the ridgetops. The trees creep nearly all the way down to the sapphire-blue saltwater, forest and ocean separated only by a narrow strip of rocky beach. On the larger islands, snow-capped peaks rise above the timberline, kissing the low-hanging clouds.

But a closer look exposes the devastating legacy of clear-cut logging—revealing a scene simply unfathomable in 1879. To think that such a huge, rugged area could be transformed so dramatically by human’s imprint would have made Muir shudder. For the past 60 years, forest management on the Tongass has been based on a simple, arcane philosophy: “Get Out The Cut.” In other words, the primary focus on the Tongass, and the surrounding state- and native-owned forestland in Southeast Alaska, has been to maximize the amount of logging at the expense of all other resources. Since about 1954 and the advent of industrial-scale logging in Southeast Alaska, more than three quarters of a million acres of high-value forestland has been logged. In some places, entire hillsides are denuded, from valley floor to ridgetop. 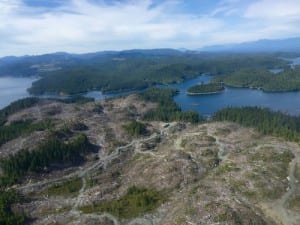 Under federal forest laws, the Forest Service can clearcut an area of 100 acres, and then only has to wait about five years before cutting an adjacent unit. The result is a patchwork of clearcuts, and often it’s all too easy to see what stand of trees is next on the chopping block. When an area is clearcut, it may provide some summertime benefits for wildlife for about 15 years, but in the winter, its habitat value is effectively zero. After that period, the second growth begins to grow tall and close together, shading out understory vegetation and resulting in habitat conditions unsuitable for many species for about 100 years.

The heart of the issue with regard to management of the Tongass concerns the remaining low-elevation old-growth forests that provide incomparable habitat for an array of species and a host of ecosystem services. Since 1954, these low-elevation forests have been disproportionately logged because they contain the biggest and most merchantable trees. This makes protecting what’s left—only about a couple hundred thousand acres—all the more critical.

The timber industry often is quick to point out that the 750,000+ acres of clearcuts comprise only a fraction of the landbase; the Tongass, after all, is 17 million acres. But what this simplistic view fails to recognize is that most of the Tongass is not productive forestland: rock and ice covers much of the northern Tongass, and much of the mid-elevation areas are covered in muskeg bog. Even many of the forested areas contain only low-value forests, due to poor soils and hydric conditions. 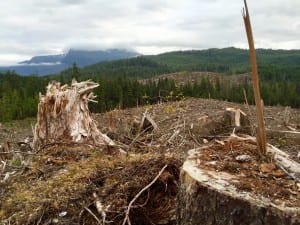 This notion of protecting what’s left came into stark focus when we traveled to Wrangell Island in the heart of the Tongass. As we drove the road system and hiked through clearcuts and remaining patches of old growth, we couldn’t help but notice the scarcity of highly productive habitat. Simply put, the best and then some has already been taken. But this hasn’t stopped the Forest Service from proposing a 5,000-acre, 65 million board foot timber sale. The sale is working its way through the administrative process, and Crag’s clients have just submitted comments to the Forest Service laying out a comprehensive case as to why this sale should not move forward.

We also witnessed first-hand the critical need to protect the remaining patches of old growth on Prince of Wales Island. During the 1980s and 90s, this island—the third largest in the country and about the size of Vermont—saw more logging than any other Forest Service unit in the nation. But again, when faced with the choice of protecting remaining habitat, promoting recreation and tourism, and preserving healthy salmon streams, versus authorizing more clearcut logging of coastal forests, the Forest Service chose the latter. The Big Thorne timber sale is the biggest timber sale authorized by the Forest Service on the Tongass in more than two decades. The worlds’ foremost expert on predator-prey dynamics in this region warned that implementing this sale would be the straw that broke the back of a sustainable ecosystem. And yet the Forest Service plunged ahead. 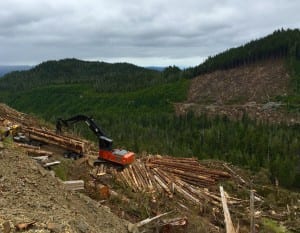 Crag is currently representing a coalition of groups in a lawsuit challenging this sale. But as the case winds its way through the court system, hundreds, if not thousands of acres of trees are being cut. While we at Crag are committed to litigating old-growth timber sales to hold the Forest Service accountable and uphold the rule of law, Big Thorne exemplifies why litigation should only be used as a last resort. With this timber sale, we could face an anomalous situation where we win the case, but have little recourse because the trees have already been cut.

What this trip really underscored for me is that it’s time for a dramatic paradigm shift on the Tongass. When it comes right down to it, the important question we must ask is who should be making the decisions on how to manage the Tongass? Is it the timber industry, bought-and-paid for legislators, and Forest Service bureaucrats? Or is it everyday people who care deeply about the Tongass, but whose voices are often drowned out? The scenic flight pilot, who for 30 years has had a bird’s eye view of the spreading clearcuts. The commercial fisherman, whose livelihood depends on robust salmon runs, which in turn depend on healthy forest spawning grounds. The operator of a local sawmill that processes small volumes of timber, in stark contrast to the regional operators who clearcut huge swaths of forestland and ship the majority of logs to Asian markets. Or even the person living in the lower 48 who has never been to Alaska, but takes solace in the fact that a true wilderness remains. These are the people we encountered on our trip, the men and women who recognize the folly of our past and present forest management practices and who are dedicated to a brighter future.

A common refrain from the Forest Service, timber industry, and Alaskan legislators is that we need a robust timber industry to drive the economy. This is a myth. The two largest mills in the region were shuttered in the 90’s, and the timber industry now only provides for a fraction of the local economy. The two regional economic drivers, on the other hand, tourism and commercial fishing, depend on intact old-growth ecosystems to preserve healthy salmon streams, wildlife habitat, and the region’s rich scenic beauty.

I often think of Alaska as America’s “last frontier.” A place that’s still raw and wild; a place where humans’ imprint hasn’t yet cut too deep. We’ve made terrible mistakes in the lower 48 over the past two centuries in order to drive an extractive economy. And we’re now paying the price. Billions of dollars are spent in efforts to “restore” areas—bringing back depleted salmon runs, re-introducing apex predators, planting trees for habitat and carbon storage. To me, Alaska represents our last chance to get things right. 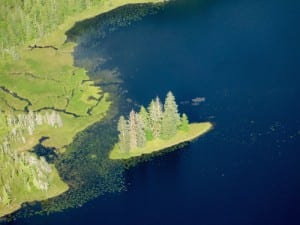 The fact that it’s 2016 and the Forest Service is still clear-cut logging old growth on our national forests—a practice that was largely abandoned decades ago in the lower 48—is simply unconscionable. John Muir described the Tongass’s island archipelago as “perfectly beautiful, blessed evergreen islands.” He must be rolling in his grave. It’s hard to believe that our federal tax dollars are spent facilitating resource extraction that supports timber industry executives, instead of investing in projects that facilitate habitat protection and recreational opportunities. The Forest Service’s mission is Caring for the Land and Serving the People. Just the opposite is happening on the Tongass.

The next several years will be critical to the future of the Tongass—the forest and the diverse ecosystem it supports have reached a tipping point. We have the opportunity to protect a critical mass of what’s left before it’s too late to reverse the trend. Let’s stand up to the Forest Service and demand a better future—for wildlife, for salmon, for people. The Tongass is worth fighting for.