In 2009, Crag Law Center helped usher the Mt. Hood Wilderness legislation through Congress and to President Obama’s desk.  The legislation adopted a hard-fought settlement that was intended to permanently protect the North side of Mt. Hood at Cooper Spur.

President Obama signed the Omnibus Public Lands Management Act which designated over 200,000 acres of new Wilderness and over 85 miles of Wild & Scenic Rivers in Oregon.

“I am ecstatic that Congress is permanently protecting the historic backcountry at Cooper Spur. I applaud the entire delegation for their hard work. Oregonians overwhelmingly support protecting lands and rivers on Mt. Hood for this and future generations. If anything, our kids will look back and say we protected too little, not too much.”

Eight years prior, local organizations and community members grew concerned about a proposal to trade away Hood River County’s Crystal Springs’ drinking watershed to Mt. Hood Meadows. The land trade between the County and Meadows set the stage for Meadows to pursue the construction of a four-season private resort with a golf course and a total of 450 units, including large homes sprawling across 4,000 acres of land on the north side of Mt. Hood. The current development on the North side is small – the Inn at Cooper Spur on 3 acres, and the ski area on 50 acres.

The community came out in full force and opposed the plan. They passed a ballot measure and filed legal actions against Hood River County for proceeding with the controversial trade. Additionally, the Forest Service proposed an old-growth logging project in the Tilly Jane roadless area on bogus claims that logging large trees would reduce fire risk. 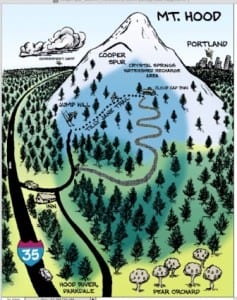 Crag Law Center stepped up to help local residents, forest conservation groups, recreation clubs, and water managers challenge the development. This was one of the first cases Crag took on shortly after our founding in 2001. The local residents formed alliances with the Mazamas, the Sierra Club, Oregon Wild, Audubon Society of Portland, Oregon Nordic Club, Friends of Mt. Hood and formed the Cooper Spur Wild & Free Coalition.

Working together, the groups opposed the controversial land trade and advanced an alternative vision for real forest stewardship. Crag represented these groups and helped craft protections for the North side of Mt. Hood.  After four years of court battles, and a win in the Court of Appeals, the Hood River Valley Residents’ Committee (HRVRC) engaged in Mediation with the County and Meadows. The parties reached a historic settlement to protect the North side of Mt. Hood at Cooper Spur and then local residents, recreation clubs, and conservation groups worked for over seven years to secure passage for the deal in Congress.

Meadows has stated that they do not want to keep the Cooper Spur Ski Area, rendering the future of this beloved place uncertain. Instead, Meadows wants to obtain the land in Government Camp AND keep significant land holdings around the Inn at Cooper Spur, which they could seek to develop in the future.

Obtaining over 100 acres in Government Camp is a big prize, as it would allow Meadows to build hundreds of ski homes. Meadows stands to make tens of millions of dollars, yet it is standing in the way of protecting the north side of Mt. Hood, the Crystal Springs Watershed, and settling a two-decade long dispute.

Our clients have invested a lot into this cause, and they are committed to resolving this dispute one way or the other. If the deal fulfills its original vision, then the community can support it. If not, well, we remain steadfast in our determination to fight for the mountain, the water, and our community. Stay tuned for updates.

Read the text of the Omnibus Public Lands Management Act of 2009.

Read this article from the Oregonian.

Crag took on this case on behalf of Thrive Hood River (formerly known as Hood River Valley Residents Committee), Oregon’s oldest local land-use advocacy organization. For nearly 40 years, their mission has been to protect farms, forests, special wild places, and the livability of Hood River’s urban communities. HRVRC was a part of Cooper Spur Wild and Free, a diverse coalition of conservation, citizen, and recreation organizations that came together in 2002 in response to Mt. Hood Meadows’ proposal. The coalition’s mission was to preserve and protect the biological integrity and historic nature of the northeast side of Mt. Hood in and around Cooper Spur from increased commercial activities, high impact recreational expansion, and timber sales on public and private lands in and adjacent to those lands.