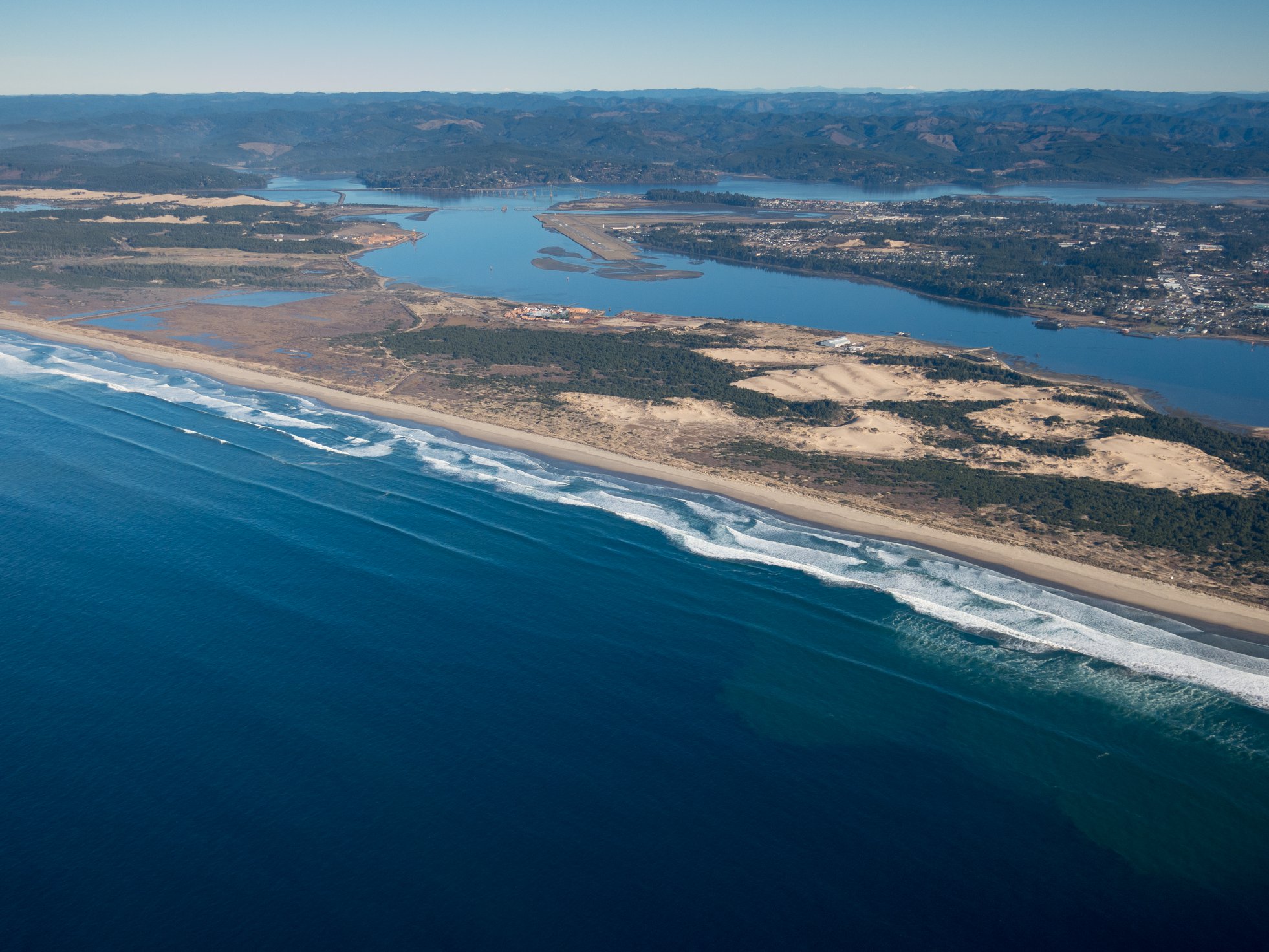 Aeriel view of Jordan Cove from the north. Photos courtesy of Alex Derr.

On July 17, 2020, the Land Use Board of Appeals overturned the City of North Bend’s land use permit that would have allowed the controversial Jordan Cove LNG export facility and pipeline to go forward.

On behalf of our long-time client Oregon Shores Conservation Coalition, Crag appealed the City of North Bend’s approval of a local land use permit. If granted, it would have allowed the disposal of dredged material from the proposed widening of the federal navigation channel in Coos Bay. The applicant proposed transporting the dredge material by pipe across the bay to two locations in the estuary known as North Point.

The Land Use Board of Appeals (LUBA) agreed with us that the city of North Bend’s approval of Jordan Cove’s plan to transport and dispose of dredge spoils was inappropriate. LUBA reversed the decision completely (rather than simply remanding it back to the city). The reversal means that, barring further appeal, Pembina will need to submit an entirely new application for the disposal of material to be dredged from the bay. Currently, the Jordan Cove LNG export terminal cannot move forward because it lacks the necessary state permits. This decision could prevent Pembina from qualifying for other permits related to the dredging of Coos Bay.

“The Land Use Board of Appeals did the right thing in reversing this wrongly made decision, which failed to protect the people of Coos County and the key resources of the Coos Bay estuary. We hope that Pembina will see this decision, along with permit denials from the State Of Oregon, as a clear indication that the Jordan Cove LNG export terminal scheme is incompatible with Oregon’s laws and Oregon’s environment, and will cancel the proposed terminal and pipeline for good.”

Coastal watchdog organization Oregon Shores Conservation Coalition and local Coos Bay group Citizens for Renewables challenged the permit approval. Crag represented Oregon Shores and Citizens for Renewables was represented by attorney Tonia Moro. On behalf of these community organizations, we argued that the City failed to properly apply the law by approving both the placement of the dredged material and the disposal pipeline. The dredged material would have to traverse the bay in order to transport the material to the locations in North Bend. LUBA agreed, finding that the dredge line is not consistent with the objectives of the Coos Bay Estuary Management Plan. LUBA also found that the applicant had failed to demonstrate that the height of the new earthen mounds of dredging material would not interfere with the nearby North Bend Municipal Airport. The city also failed to adequately address noise impacts from the project.

The struggle to prevent development of this fracked gas export facility in Coos Bay is fought on many fronts:  national, state, and local. We have been deeply engaged for more than sixteen years in the effort to prevent the Jordan Cove Energy Project from doing grave damage to the Coos Bay estuary and becoming Oregon’s largest emitter of greenhouse gases. The reversal of this permit will be a significant roadblock to the LNG scheme.

Crag and Oregon Shores have several other land use permit challenges pending before the LUBA that are likely to be decided over the coming months.

Read our client Oregon Shores’ perspective on this victory and the fight to stop Jordan Cove LNG.

Dig into the history of this long-fought battle.