Where Are They Now? Will Carlon 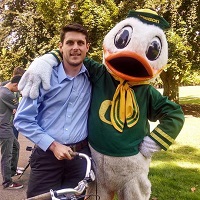 Will Carlon was a summer associate in 2014 and worked for staff attorney Maura Fahey. He researched case law, statutes, and regulations and drafted memoranda for cases involving water quality, land use, notice requirements, attorney’s fees, discovery issues, and various local, state, and federal environmental laws. He also drafted motions and supporting memoranda, prepared comments to be submitted at public hearings, and wrote letters advocating on behalf of Crag’s clients.

He is from Chico, California and is a graduate of University of California, Davis, where he studied communications and business management and he was on the fencing team. He later attended law school at the University of Oregon, and says that he was motivated to come to because Crag had an excellent reputation at my school for being a place to get great experience while doing meaningful work. He also says that Crag indeed lived up to that reputation.

Will believes that his summer at Crag gave him a first-hand look at the type of law that he wanted to practice: he gained practical experience as a law student by doing the same work that he is currently doing as an attorney.  In retrospect, he admits that the most notable part about his work at Crag was the sheer variety of law he engaged with during his time there. Overall, his experience at Crag helped to prepare him for the externship at the District Court and his current position.

He currently lives in Napa Valley, California and works for a small firm in Petaluma (the Law Offices of Andrew L. Packard). The firm specializes in Clean Water Act litigation.  Specifically, their focus is on protecting the water quality of California’s waterbodies by enforcing the Industrial General Stormwater Permit under the citizen suit provisions of the Clean Water Act.

Between working at Crag and working for the Law Offices of Andrew L. Packard, Will finished his last year of law school at the University of Oregon, was an extern for the Hon. Magistrate Judge Coffin at the Oregon District Court in Eugene. He also studied for—and passed—the California Bar Exam, and worked as a cellar-hand making wine during harvest while waiting for the bar exam results.

Jordan Bollmann is a senior at Duke University, who interned with Crag Law Firm via the DukeEngage Program during the summer of 2016.