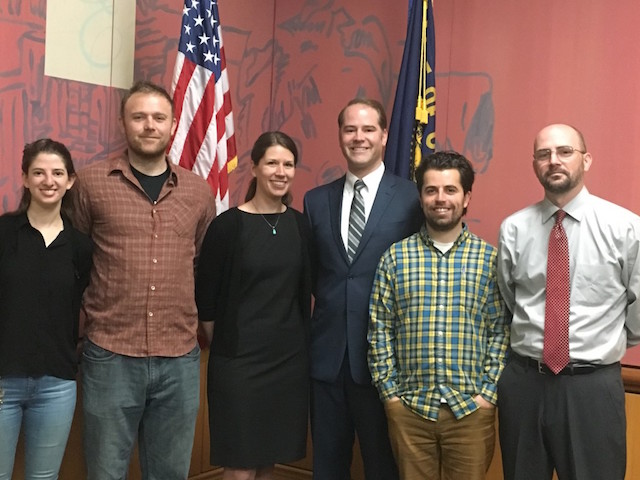 June 15, 2017 (Salem, OR) – The Oregon Land Use Board of Appeals (LUBA) heard oral arguments today about a challenge to Portland’s landmark fossil fuel ordinance. In 2016, the City of Portland passed the land use ordinance restricting development of new major fossil fuel projects, such as oil-by-rail terminals or coal export terminals. The ordinance drew a challenge from the oil industry and the Portland Business Alliance, who have asked LUBA to overturn the policy. Crag is representing a coalition of groups (Columbia Riverkeeper, Portland Audubon Society, the Center for Sustainable Economy, and Oregon Physicians for Social Responsibility) that intervened to support the City’s case in defending the ordinance.

“Today we stand with the City of Portland in defending our right to set a path to a renewable energy future,” said Mia Reback, with 350 PDX. “Big Oil and their allies at the Portland Business Alliance seek to undercut the City’s bold action against polluting fossil fuels, but this policy is more important than ever now that the Trump administration has withdrawn from the Paris Climate Agreement.”

The Council’s unanimous approval of the fossil fuel ordinance drew national and international attention for setting an example that other cities could follow in taking city-level action to address climate-changing pollution. The vast majority of public input to the Council supported the ordinance.

“The Portland Business Alliance’s Board, which voted to support this lawsuit, is made up of some of Portland’s most well recognized companies,” said Micah Meskel, with Portland Audubon. “For too long these companies have been able to hide in the shadows while the Portland Business Alliance has taken extreme positions that put our communities and environment at real risk. It is important to understand which companies serve on the PBA Board and to hold them accountable as well.”

In passing the ordinance, the City cited not only the climate implications of new fossil fuel projects, but also health and safety threats posed by oil train terminals and other fossil fuel proposals.

“We’re in a period of transition away from fossil fuels. This is not just a practical issue, but a moral issue as well, because of the health and safety implications of unmitigated climate change,” stated Dr. Patrick O’Herron of Oregon Physicians for Social Responsibility. “Those who are least responsible for climate change are experiencing the worst health impacts already. We have a responsibility to turn this around on our watch.”

Others in the coalition of intervenors highlighted how the City is taking further concrete steps to implement its policy to reduce fossil fuel dependence.

“The City of Portland rightly concluded that fossil fuel use should begin to decline. In fact, Portland just passed some the strongest renewable energy goals in the country,” said Nick Caleb, staff attorney with Center for Sustainable Economy. “The benefits of the clean energy economy come without the risks of explosions and spills from dangerous fossil fuel infrastructure.”

LUBA may rule within weeks on whether the City’s policy complied with Oregon’s land use laws.