How the Oregon Beach Bill Passes Down a Legacy 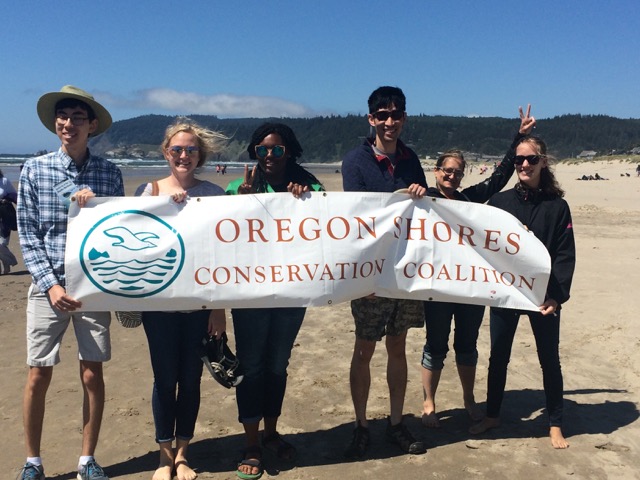 The beach holds a special place in my heart. Some of my best memories were at beaches: diving into waves with my best friends, sailing with my brothers, and lounging on the sand with my parents. In all the times I visited, I never questioned the fact that I had access to the beach.

I first began to think about the distinction between private and public beaches when I came to Oregon to intern with Crag. On July 6, Crag took me and the other summer interns to Cannon Beach so that we see what we were working to protect. But we were not just there to appreciate the beauty of the coast. We were also there to celebrate the 50th Anniversary of the Oregon Beach Bill, a historic law that reestablished public ownership of Oregon’s coastline and ensured public access.

Though many Oregonians and tourists like me appreciate Oregon’s public beaches, few realize how much dedication and public involvement it took to make all of Oregon’s beaches public. I certainly did not realize how much work was done 50 years ago, long before I was even born. Phillip Johnson, Executive Director of Oregon Shores Conservation Coalition (Oregon Shores), emphasizes this point. He reminds that, “People need to be aware that there was quite a struggle to put the Beach Bill into place and to develop this legacy of public shorelines.” 50 years ago, Governor Tom McCall and environmental advocates educated the public about what was at stake until public outcry pressured policymakers to pass the Beach Bill. Because of Tom McCall’s dedication and public support organized by Citizens to Save Oregon Beaches, development was halted on the beaches. Ecosystems were protected from harm, and natural beauty was preserved.

But the Beach Bill did much more than protecting the shoreline. Johnson highlights that the passage of the Beach Bill was the “hinge point for the development of environmental law in Oregon.” It sparked the Oregon environmental movement, inspiring leaders and community members to come forward to protect Oregon’s natural legacy. For example, many Beach Bill supporters decided to unite in a coalition to protect the coast. 46 years later, Oregon Shores continues to encourage people to get involved with coastal issues. They provide advice to community members as well as monitor largescale issues on the coast.

On this milestone, Johnson reminds that it is not enough to celebrate past successes. This anniversary is a time to not only acknowledge the work it took to pass the bill but to also “rededicate ourselves to our legacy of public beaches and public shorelines.” Many challenges still face the shorelines today—from marine debris to destruction of habitats to climate change. Just as the beach now belongs to everyone, Johnson remarks that “stewardship over the shoreline belongs to all of us too.”

The 50th Anniversary of the Beach Bill is a celebration of work done and a reminder of work yet unfinished. I am thankful for all the leaders who have spearheaded the environmental movement over the past 50 years and excited to continue the legacy of environmental work begun before my time. This summer, that means interning at Crag. This fall, it means studying environmental science and policy at my college, Duke University. In the future, it could mean anything and everything.

Elizabeth Allen is a rising sophomore at Duke University. She is interning at Crag this summer as part of the DukeEngage program.