In 2019, the Oregon Court of Appeals reversed two decisions issued by Yamhill County that authorized subdivisions on high-value farmland in the Chehalem Mountains. These decisions protect Oregon farmland from being converted into developments proposed under former Oregon Ballot Measure 37.

Passed in 2004, Measure 37 upended Oregon’s land-use system and opened up Oregon’s farmland and farmland to development.  Thousands of landowners made claims for “compensation from state or local government” land use safeguards seeking to convert high-value farm and forest land.  Measure 37 proponents insisted that its purpose was to allow rural landowners to build a few houses for their family, but in reality, the law allowed gravel pits, strip malls and subdivisions developments to be built in farm and forest country.  Seeking to cash in, developers proposed building an RV park on sacred native burial grounds, shopping malls on fertile farmland, and gravel pit mines along the Rogue River.

Oregonians quickly realized they had been had.  The impact on local agriculture and water supplies was too much, and so they passed Measure 49 to protect farmland, forestland, and water supplies. Measure 49 reigned in the worst abuses and provided modest development options instead.

-Ralph Bloemers, Crag senior Staff Attorney who represented local community members on this case for over a decade

However, in Yamhill County, a number of property owners with claims under former Measure 37 had sought to go ahead with their large developments- despite the passage of Measure 49. The county ignored the law and requests and failed to consider the negative impacts of the developments on neighboring property owners. These large development projects threatened rural land, the livability of these communities, and the viability of local groundwater supplies. For 12 years, Crag provided legal support to Friends of Yamhill County and neighbors, including farmers, vineyard owners and winemakers, to challenge these development proposals. 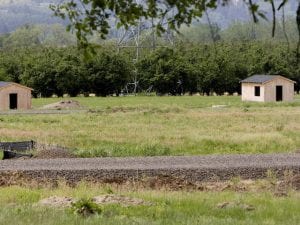 In one case, claimants built these shacks, calling them “houses”, in order to gain approval for compensation.

In the second appeal in 2019, our clients pointed out that the landowners had not even started the large developments before Measure 49 passed. The owners and recipients of Measure 37 claims had spent money on lawyers and consultants and thrown up sheds to try to bolster their claims. While Yamhill County concluded it did not matter what the owners had intended to do, the Oregon Court of Appeals rejected these arguments and reversed the trial court. Now, instead of large subdivisions sprouting up on prime farmland and threatening water supplies, these areas will be protected by Oregon’s land use safeguards. This court of appeals victory was a huge win for Oregon’s local farmers of the Willamette Valley who have been challenging these cases for nearly 15 years.

Learn about Measure 37 and Measure 49 of Oregon land-use law.

Crag represented Friends of Yamhill County in these court decisions for protection of vital farmland! Over the past 13 years, Crag has represented individuals as well, including farmers, vineyard owners, and winemakers in protection of their local businesses.