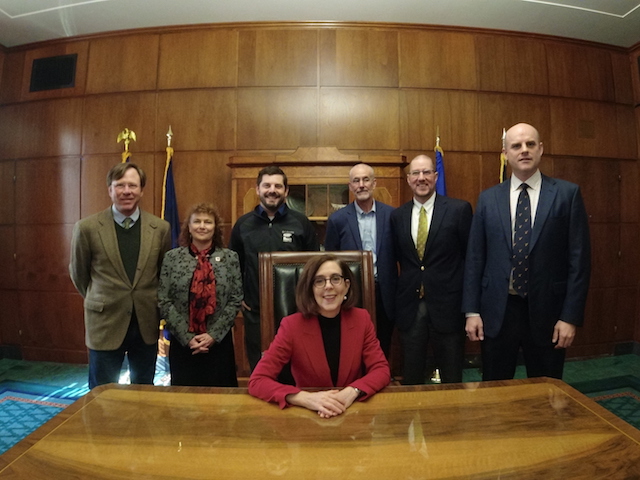 On Friday, June 26th, the Oregon Legislature passed new forestry reforms and directed the state to set up a mediation process for comprehensive protections for salmon streams on non-federal forests. In an overwhelming bipartisan vote, both chambers of the Oregon Legislature today passed the Forest Aerial Spray Bill (SB 1602), which will strengthen the state’s aerial pesticide spray regulations and set the stage for fundamental reform of the Oregon Forest Practices Act. The legislation comes four months after thirteen conservation and fishing organizations reached agreement with thirteen timber companies on a path forward to modernize the state’s long-outdated forestry laws.

The passage of this bill is the culmination of many years of hard work and negotiating by the Oregon Stream Protection Coalition, Crag Law Center, Beyond Toxics, Oregon Wild and Wild Salmon Center, along with massive grassroots pressure from a wide variety of allies and supporters across the state.

The legislation sets up bigger buffers from aerial pesticide spray around homes, schools, small streams, and drinking water intakes. The new law ushers in a first-in-the-nation system to allow people to get notified when aerial spray of forestlands happens near their homes. And it requires larger stream buffers on many salmon streams in the Rogue-Siskiyou region.

Over the last three years, Crag staff attorney Ralph Bloemers worked with allies to help craft ballot measures to protect forest waters, and these measures brought the timber industry to the table. Ralph was on the team that negotiated the agreement that led to the passage of HB 1602. While this agreement is a significant step in the right direction, much work remains to be done and more change is needed. Crag continues to work with front-line communities, public health advocates, and forest conservation allies to advocate for the changes needed to ensure clean water and public health.

Summaries of the legislation and the Memorandum of Understanding are here and here.