Patricia Donohue: Ready for Anything 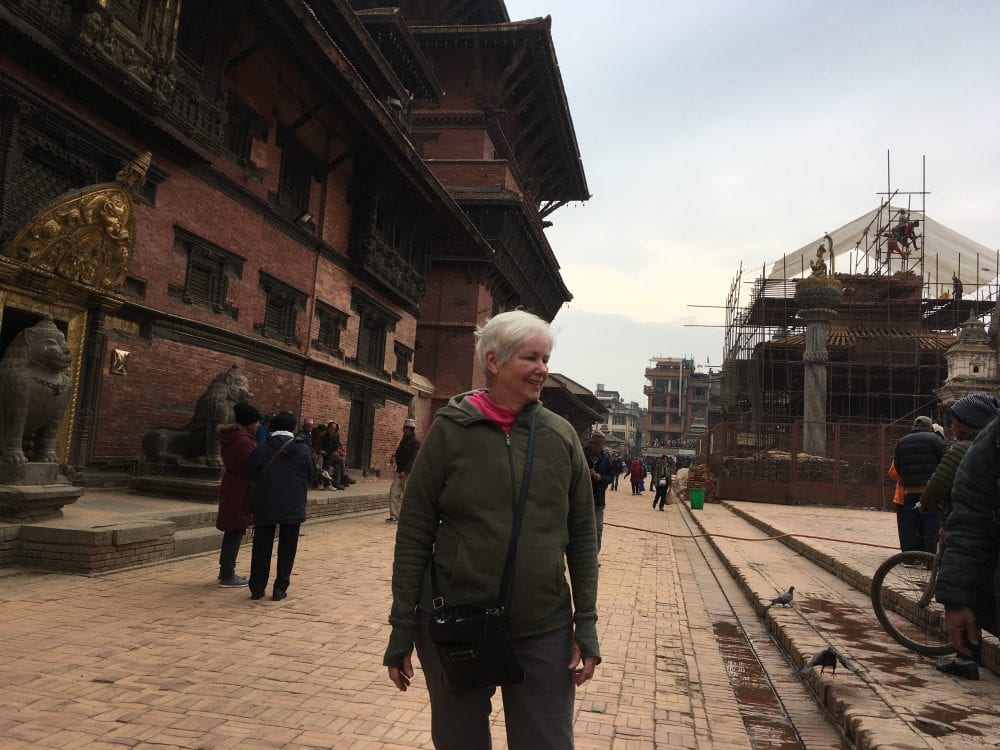 Patricia Donohue is a development and administrative assistant at Crag Law Center. Though she moved throughout the Southeast during her childhood, she calls Kentucky home. She studied anthropology and gerontology at the University of Kentucky as both an undergraduate and graduate student. She came to Crag after a thirty-year career in the equine industry, but fits right in with the environment-oriented staff at Crag.

If Patricia Donohue’s upbringing gave her any lessons for her future, they were in adaptability. All summer long, she’s been a role model for going with the flow, whether it’s juggling the laundry list of to-dos within the Crag development office, throwing herself into a crouch position in the Class 4 rapids during our office whitewater rafting trip, or even just dressing in one of her summery, flowing shift dresses.

As it turns out, her flexibility traces its roots back to a youth replete with relocation. A self-proclaimed army brat, Patricia spent her childhood hopping from place to place. She ticked off the list for me in her warmly relaxed, hint-of-drawl accent: her family had lived in Alabama, Georgia, Maryland, Virginia, France, and Kentucky by the time she was twelve, at which point they parked in Louisville for good. Having received a fairly complete southeastern tour, staying local seemed just fine to Patricia; she attended the University of Kentucky in Lexington for both undergraduate and graduate school.

At school, she exercised her trademark adaptability by exploring different fields. Growing up, she’d wanted to be an archeologist, gripped after reading about the discovery and excavation of ancient Troy. Eventually, she realized her curiosity lay in ethnography instead, adding with a chuckle, “I was interested in the culture of people, rather than going out and digging up dead things.” She learned about cultures across the board, and by her senior year had begun to sway towards medical anthropology. From there, her interest refined again – she wanted to focus on gerontology, or the scientific and cultural study of aging.

Unfortunately, there was no gerontology program at the time; Patricia, ever the problem-solver, tried to meld together the classes and fields she would need to take from the sociology, psychology, and anthropology departments. This interest found little support from the committees in her own field, and in the end, “It didn’t fly,” she remarked wistfully. “Of course, now the University of Kentucky has a very robust gerontology program,” she added, laughing at the irony. We agreed that she must have at least gotten the ball rolling for future gerontologists.

Not afraid to switch gears, Patricia saw a chance and started to work with horses; little did she know that the transition would turn into a thirty-year career in the equine industry. When I asked her about it, she quipped, “Ah yes, my descent into the dark reaches of hell….” Laughing, she assured me, “No, just kidding, it was just very expensive.” Though a lifelong lover of horses, she hadn’t been able to pursue her interest as a child. After schooling, she happened to meet someone involved in the industry and jumped at the chance to learn more. This mentor taught her everything from the basics of putting on bridles and halters to advanced horsemanship.

Patricia recounts, “He gave me my first horse, which I broke myself.” I expressed some shock at this; Hollywood has taught me that horse breaking involves considerable know-how and experience, but Patricia assured me that she didn’t have trouble picking it up. “I had the benefit of someone who could stand there and say, ‘This is what you do.’”

She fell into a job with the American Holsteiner Horse Association, which “combined a passion with a paycheck,” as Patricia recalls. This, coupled with a similar job at the American Hanoverian Society, gave Patricia her comprehensive administrative know-how.

The position lasted many years, and eventually Patricia found herself wanting a change of scenery. “I didn’t really mean to stay in Kentucky,” she explains. “I was going to graduate school, and then all of a sudden you’ve got a job and you ride horses, you have cats, you’ve got a dog, you know, it’s a little bit hard to pick up.” She had a sister and a friend living out in Oregon and contemplated a move, but was hesitant – she had a good, well-paying job at the Holsteiner registry and didn’t think she could count on finding a comparable position out west.

Apparently, the Board of Directors for the registry had a good deal of confidence in Patricia’s adaptability. To Patricia’s surprise, a board member who knew of Patricia’s desire to move out west brought it up in a board meeting, and the members decided that if Patricia moved, her job would move with her. “I was the only employee at the time, so that’s what happened,” Patricia recalled.

She worked out of Wilsonville, Oregon and communicated remotely with the Board for a few years until retiring. During that time, she picked up the fiddle again. She had played as a kid, but when her schedule got busy with horses and work, she didn’t have the time. “If you want to get good at all, you have to have time to practice.” As a silver lining, her move out west, which required selling her horse, presented her with the opportunity to get back into music.

Through mutual friends, she was introduced to the bluegrass community, and from there met others well established in the music scene. She recalled learning of countless opportunities to explore the community: “They’d say, ‘Oh, there’s this jam here and there’s this contra dance going on, and there’s these Irish music sessions.’” She began expanding her interests. One of her greatest discoveries was the existence of dance camps: “Even just in Oregon, there are so many opportunities to go and spend a weekend in some beautiful place like Westwind… I just got back from a dance camp in Orcas Island, which was what they call a do-it-yourself camp.” In exchange for a small fee and some chores, she explained, “You have all your food, a bunk to stay in, deer traipsing across the lawn, canoeing, hiking…” It certainly didn’t sound too bad.

She was grateful, too, for the welcoming culture. “Music and dance transcend. If you go to a contra dance here, you’re going to see guys in swishy skirts or dresses, people are happy to dance with the same sex, or not. It’s just so… egalitarian. It’s so much fun.” Hearing her talk, it’s clear to me that Patricia has found a passion in these music and dance communities. She sparkles when she tells me about jamming: “I can’t think of anything really more fun than sitting practically knee to knee with somebody and trying to figure out a tune. It’s a real joy.”

Yet the music has provided Patricia with more than a hobby; it led her to her position at Crag. Through mutual friends, Patricia was introduced to Suzanne, Crag’s development director. Patricia was enjoying her retirement, but at the same time recalls thinking, “Golly, I’d really like to do something.” Suzanne knew there would be a place for Patricia, and the rest was history.

Though running an office for horse registries gave Patricia a lot of transferable administrative skills, she’s found that working at Crag has given her a “deeper understanding of the environment.” She described a series of time-lapse images she saw at Crag that showed the progression of logging near Westwind, an area she’s familiar with. “You’re driving and there’s a curtain of trees along the road, and you’re thinking ‘Oh, it’s so pretty!’” Behind that forested veil, however, “It’s just clear-cuts. And they’re planting it back into a monoculture.”

Working with the attorneys has given her plenty of insights, and she’s come to realize that her favorite part of working at Crag is the people. “I ran an office by myself for almost ten years, and you get tired of being the only employee,” she says. “At Crag, it’s delightful to be around such intelligent, passionate people. It made me realize what a void I was working in, in a lot of ways. It’s really nice to be around people who care so much about what it is that they’re doing … it’s not ‘all about me,’ and it’s not about making money.” Patricia humbly describes her own job as “support staff,” but in such a small office trying to get so much done, Patricia is far more crucial than she lets on. Her readiness to put on so many hats makes her an invaluable addition to the Crag team. Flexibility has always been one of Patricia’s strong suits.

Genevieve Beske is a DukeEngage intern at Crag for Summer 2019. She is a rising junior at Duke University majoring in English, and is hoping to one day pursue a law degree. She is passionate about the environment and loves nature, and has enjoyed learning about how Crag works through complex environmental problems and handles the challenges of nonprofit work.