Late last week, PBS Newshour ran a special about the spraying of pesticides on private forestland in rural Oregon.

Large, industrial landowners douse fresh clearcuts with chemicals to kill off unwanted vegetation.  Nearby families often complain of getting sick and property damage, but they have had a difficult time “proving” that nearby spraying of pesticides and herbicides was to blame. 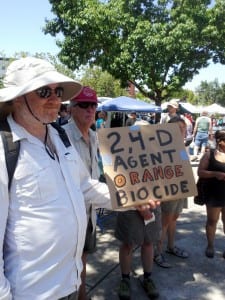 From a rally in Eugene earlier this summer

Residents living near Triangle Lake, Oregon finally got fed up and enlisted the assistance of a university professor – Dr. Dana Barr – who tested the urine of 41 residents.  The results?  She found breakdown products of atrazine and 2,4-D in the urine of every single person tested.

Atrazine and 2, 4-D are both common chemicals used by the timber industry in forestry operations.  And they’re both suspected poisons – endocrine disruptors that may pose unique threats for children and fetuses with quickly developing nervous and reproductive systems.  2,4-D was also a major ingredient in Agency Orange.  The science is still developing on just how dangerous these chemicals are, especially at low concentrations in sensitive populations.

The back story that PBS did not cover is an unjust and unconscionable Oregon law that shields the timber industry from legal liability for chemical trespass on their neighbors’ properties.  The so-called “Right to Farm and Forest” law – an Orwellian misnomer – declares the timber industry to be immune from trespass actions resulting from applications of pesticides.  As a result, neighbors have had little recourse even when sprayed repeatedly over a period of time.

Recently, however, a few courageous individuals from Triangle Lake asked that a court in Oregon declare this law to be in violation of the Oregon Constitution, but a local court dismissed their case.  The State of Oregon defended the law by asking that the court reject the case on a technicality without getting to the merits of the Constitutional issue.  But people who live in rural communities all across Oregon have been impacted by similar spraying events.  This case deserves to be decided on the merits in a court of law.

The Oregon Court of Appeals will consider their appeal later this year or early next.  A few weeks ago, we worked with Beyond Toxics, the Pesticide Action Network of North America and some local Oregon citizens to submit an amicus brief – from a friend of the court – providing information on the threats posed by exposure to pesticides and additional views on why this important case should move forward.  We hope it will be one step towards justice for rural Oregonians struggling to protect their clean air and clean water and their private property from pesticide spray and chemical trespass.