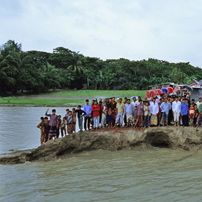 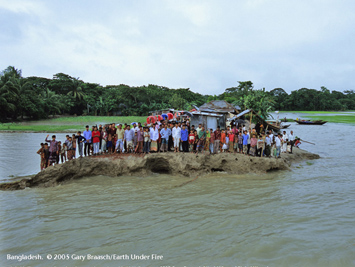 Esteemed environmental photojournalist, Gary Braasch recently released a newly updated version of his acclaimed book, Earth Under Fire: How Global Warming is Changing the World. The Portland local and Ansel Adams award-winning nature photographer was also featured in a recent article in Bloomberg News where he presented his views on global warming and the needed steps to address the mounting problem of climate change.

Earth Under Fire is an illustrated presentation of climate problems, solutions and science. Covering 22 nations and all 7 continents, the book presents visual evidence of the dangerous climate changes occurring around the globe. In work over 6 years and consultations with over 170 scientists and experts, Braasch combines scientific facts and dramatic photos to create a moving portrait of our growing climate crisis.

Highlighting the impact of climate change on health, international relations, human rights and fresh water, Earth Under Fire catalogues the changes and disruptions caused from rising global temperatures and presents possible steps that can be taken to mitigate the effects of climate change. With a focus on sea-level rise, extreme weather, and quickened migration of plants and animals, Braasch records the impact of climate change on cities, governments, individuals, corporations and culture. Going further, Braasch also includes the developments in technology and science that are taking place around the world in the fight against global warming.

With its startling photos and informative science, Earth Under Fire acts as a call to action for people around the world to work to control climate change. For Braasch, this includes increasing the use of solar, wind and electric power and expanding mass transit. In his recent interview for Bloomberg News, Braasch also called for the creation of a carbon tax on products based on the amount of carbon dioxide created in the process of manufacturing each item.

Braasch’s photographs have appeared in publications like National Geographic, Time and the New York Times as well as used by the United Nations to highlight climate change. Braasch also donated photographs to Crag’s Wild Shots Photography Auction in 2007 and continues to support the mission of Crag Law Center.

You can see the Bloomberg article at:

Or learn more at: