Preserving the Stories and Legacy of Kate McCarthy 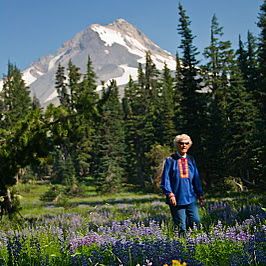 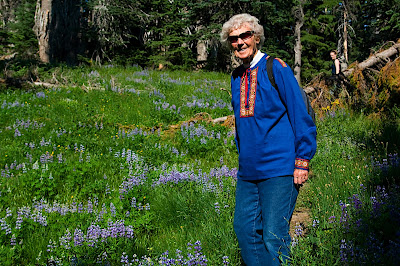 At 92 years-young, Kate McCarthy has probably been hiking the trails of Mt. Hood longer than anyone else on Earth. As a young teenage girl, she camped in lush alpine meadows filled with wildflowers and song birds and learned to mountaineer with her father. Later, she ran a youth camp on the mountain and introduced children to the beauty of Oregon’s iconic peak. And when commercial development arrived in the late ’60’s and early ’70’s, she began what would eventually become a 40+ year mission to preserve Mt. Hood for future generations.

Over those many decades, Kate has doggedly worked to protect the sensitive alpine wetlands and the high-elevation krummholz ecosystem from the rapid expansion of Mt. Hood Meadows. Kate worked year after year with a number of other dedicated activists, ground-truthing proposed projects that threatened to impair the headwaters of the East Fork of the Hood River and working to force the Forest Service to protect our public resources. She helped to form Friends of Mt. Hood and the Hood River Valley Residents Committee, which have become well-known local conservation organizations, and she inspired hundreds of people over the years to visit Mt. Hood and appreciate her beauty and solitude.

Over the past seven years, Kate worked closely with the Cooper Spur Wild and Free Coalition and Crag to protect the North Side of Mt. Hood and Cooper Spur from Meadows’ plans to build a large destination resort at the head of the Hood River Valley. Her work on that project recently culminated with a celebration of the new Mt. Hood Wilderness bill as Senator Ron Wyden stood by her side.

With the generous support of the Jubitz Foundation, the Crag Law Center and Bark have launched a project to preserve Kate’s stories, recorded over the decades through her widely known photographs, her encyclopedic knowledge of the ecology of Mt. Hood, and her bottomless boxes of Forest Service documents and scientific information about the mountain. Our hope is that Kate’s work will continue to inspire Oregonians and people from all around the country to preserve and honor the incredible resource that is Mt. Hood. The project will consist of archiving her photos and documents, preserving her stories with the help of an historian and capturing video footage of Kate telling her stories surrounded by the beauty of Mt. Hood.

This past Friday, Crag staff attorney Chris Winter and three summer associates – Veronica Warnock, Jennifer O-Brien and Naomi Rowden – had the unique pleasure of hiking the slopes of Mt. Hood with Kate and a filming crew from K2000 Productions. The wildflowers and meadows of Mt. Hood welcomed Kate as they have for the past 80 years, and everyone was inspired by Kate as she hiked the Upper Umbrella Falls trail to the Timberline Trail and then back down to the Mt. Hood Meadows parking lot. During the day we stopped at several locations and captured Kate on film telling the stories of her life while surrounded by the flowers and wildlife that she has cared for all these years. One could feel the passion flow from one generation to the next as she recounted tales of the hard work, challenges and successes she experienced along the way.

Crag would like to thank its partners in this effort: the Jubitz Foundation, Bark, K2000 Productions (Jeff Alzner and Brooke Kirklin) and most of all Kate McCarthy. We look forward to completing the work and preserving Kate’s legacy for future generations of Oregonians to enjoy. In the meantime, enjoy some photos of our day out on the mountain. For more information about this project, please contact Chris Winter at 503-525-2725 or chris@crag.org.