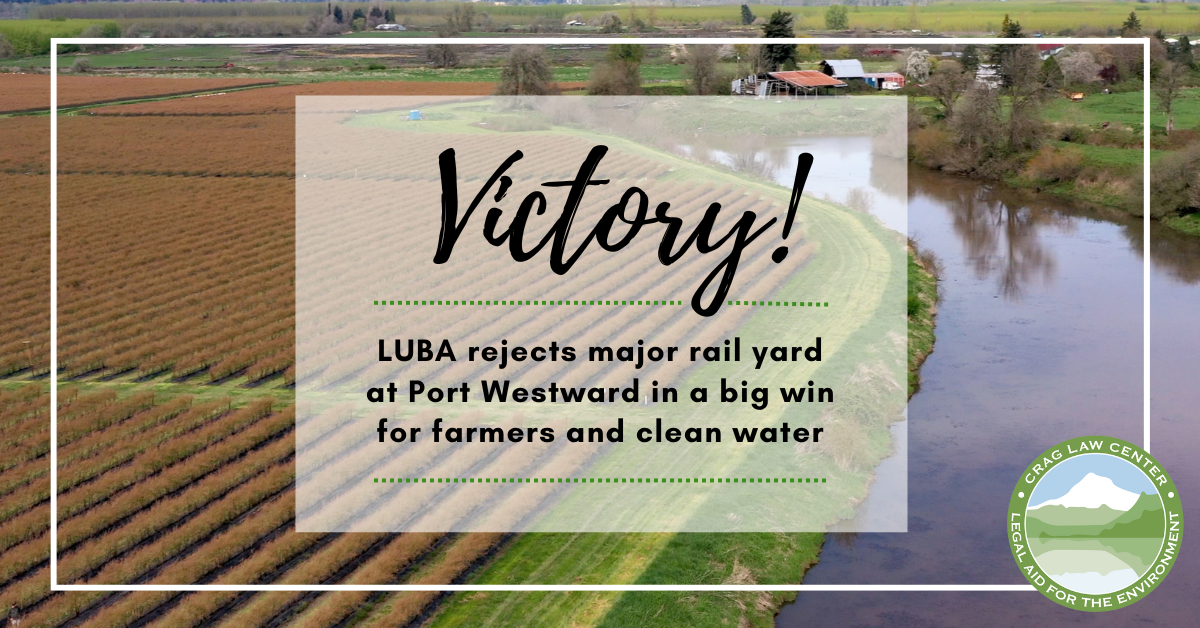 On October 27, the Oregon Land Use Board of Appeals overturned Columbia County’s approval of a 400-car rail yard for the proposed NEXT refinery at Port Westward.

Salem, Oregon — Columbia Riverkeeper, 1000 Friends of Oregon, and farmers at Port Westward celebrated a decision by the Oregon Land Use Board of Appeals (LUBA) that overturned Columbia County’s approval of a 400-car rail yard proposed in tandem with a new major refinery at Port Westward. LUBA reversed the County’s decision because the rail yard is not allowed on farm land. Houston-based NEXT Renewables LLC proposes a renewable diesel refinery and rail yard at Port Westward. Local farmers, conservation groups, and neighbors oppose the refinery and rail yard and describe the LUBA decision as a major setback for the project.

“LUBA’s decision exposes a major flaw in NEXT’s proposed refinery—the unmistakable impact of a large rail yard on neighbors and water resources,” said Dan Serres, Conservation Director for Columbia Riverkeeper. “Without this approval, NEXT cannot build the refinery and rail yard, and major state and federal permits remain undecided as well. This is a major setback for the proposed refinery and rail yard, which pose a major threat to the health of the community and clean water in the Lower Columbia River.”

“The decision is a recognition of the importance of Oregon’s land use laws – to protect our irreplaceable farm lands, especially in the face of a changing climate,” said Mary Kyle McCurdy, Deputy Director of 1000 Friends of Oregon.

“LUBA got this right. Our farm—which has been here for generations—our business, and our community would be negatively impacted by the rail yard and the refinery,” said Mike Seely, mint farmer at Port Westward. “NEXT came to town promising the moon, including very little use of rail for training in feedstock, like seed oil, from the middle of the continent. Our community saw right through NEXT’s bait-and-switch—adding a 400 car rail yard to the project. We are glad that LUBA saw through it, too.”

Local farmers, clean water advocates, and uprail communities concerned about long trains bisecting Columbia County cities and towns remain adamant that the Port Westward area is better suited to agriculture, forestry, and fisheries than a major new refinery that would produce diesel from fracked gas and unknown feedstocks. The proposed refinery and rail yard would be located among farms, residences, and close to a Buddhist monastery. State and federal agencies have yet to make final decisions on the project, and the Corps is expected to release a draft environmental impact statement in early 2023.