On behalf of Bark and Food and Water Watch, Crag  filed two protests challenging the Oregon Water Resources Department’s (Water Department) approval of permits that move Nestlé one key step closer to bottling and selling Oregon’s water.  Crag is donating our services to protest the Water Department’s decisions on behalf of the thousands of Oregonians who are committed to protecting their natural resources.

Bark and Food and Water Watch are members of the Keep Nestlé Out of the Gorge Coalition, which also includes the union Oregon AFSCME, Oregon Mission Centres of the Sisters of the Holy Names, Oregon Physicians for Social Responsibility, Environment Oregon, Alliance for Democracy and the Sierra Club.   The Coalition formed two years ago in response to Nestlé’s bottled water proposal, which has become the most controversial proposal in the Columbia River Gorge National Scenic Area since the proposed casino in Cascade Locks. 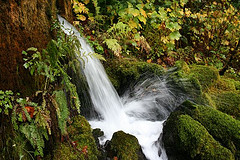 In February the Water Department approved water transfer permits that start Nestlé down the path to bottling and selling Oregon water.  The spring water is located on state property and is currently used by the Oregon Department of Fish & Wildlife (ODFW) for a hatchery raising threatened salmon.  The approved transfer applications now under protest are an integral part of the process that would lead to ODFW exchanging its water rights with the City of Cascade Locks, so that ultimately the City can sell the spring water to Nestlé.  In essence, the state agencies are carving up the water right for a publicly owned fish hatchery to facilitate Nestlé’s plans to bottle and sell Oregonians’ public water for private gain.

“It’s the State’s job to safeguard Oregon’s public resources, especially our precious water resources for the benefit of all Oregonians, not multinational corporations. Allowing the Oregon Department of Fish and Wildlife to move forward with this water rights exchange would permit a state-owned resource to be used for a private business model that is unsustainable,” said Jackie Dingfelder, Oregon State Senator for District 23. The Coalition has raised many other concerns, including the increased manufacturing of wasteful plastic bottles and Nestlé’s documented track record of not serving rural communities’ best interests when bottling public water resources.

We need your help!  Support Crag’s legal efforts to prevent Nestlé from bottling and selling our spring water by making a donation to our No Nestlé in the Gorge fund.

Stay tuned here and on our Facebook page for updates on these protests, and check out Scott Learn’s recent Oregonian article about this issue.