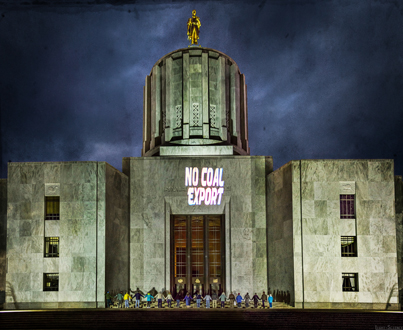 For over two years, Oregonians have been faced with the daunting possibility of playing host for a coal export super-highway.  A powerful coalition of groups have come together in the Power Past Coal campaign to bring the environmental and health risks associated with coal export to the public forum and to put pressure on decision makers to fully consider the proposals.  Crag client Columbia Riverkeeper is an active voice in the campaign and together we have been vigilantly reviewing and commenting on each stage of the proposals.

Campaigners light up the State Capitol with “No Coal Export” to show Gov. Kitzhaber they are on his side.

The last few weeks have brought a success on the part of the campaign with Governor Kitzhaber declaring that it is time to say NO to coal exports in Oregon!  In a recent speech to the Oregon League of Conservation Voters, the Governor acknowledged that when compared to Washington, Oregon law is unfortunately lacking when it comes to consideration of large-scale proposals like the Ambre Energy coal export proposal at the Port of Morrow.  Despite this, Kitzhaber assured the audience and supporters that he would do everything within his authority under the law “to ensure that we do not commit ourselves to a coal-dependent future.”

Ambre Energy has already begun pushing back on this pledge by calling bluff on tribal fishing claims and arguing that the Oregon Department of State Lands (DSL) is acting outside its legal authority.  In reviewing Ambre’s application for a proposed dock for the Coyote Island Terminal at the Port of Morrow, DSL has taken into consideration the potential impacts to tribal fishing rights held by the Confederated Tribes of the Umatilla Indian Reservation and the Confederated Tribes and Bands of the Yakama Nation.

In a letter to DSL last week, Ambre argued that the dock would not “unreasonably interfere” with tribal fishing, and that even if it did, DSL does not have the authority to consider those impacts.  The letter also seeks to challenge the existence of the tribal fishing claims in the proposed dock area by providing declarations from community members, port workers and tugboat operators claiming they have never witnessed tribal fishing at the site.  Ambre points to past DSL permit approvals to argue that DSL has not considered fishing rights or other project impacts associated with dock proposals in the past and thus cannot do so now.

This is just one in a slew of permits that the proposed terminal must secure before operation.  State agencies have been criticized for the level of review afforded to other permitting decisions as well.  A recent Oregonian op-ed accused state regulators of dragging out the permitting process and having bias against coal export.  The Oregonian Editorial Board calls Kitzhaber anti-employment and labeled the campaign against coal export as NIMBYism.  And perhaps it is, if you can classify the global atmosphere as your backyard.

Critics continue to downplay the impacts of coal export by focusing on the transfers from rail to barge and barge to ship and ignoring the bigger picture of dozens of mile-long coal trains rolling through small towns each day, spewing dust along the way, and the burning of dirty coal in Asia contributing to the fossil fuel pollution we in the Pacific Northwest have worked so hard to move away from.  Crag continues to work with Columbia Riverkeeper to make sure that state and federal agencies are considering all these impacts and are holding the coal export industry to a high standard under the law.