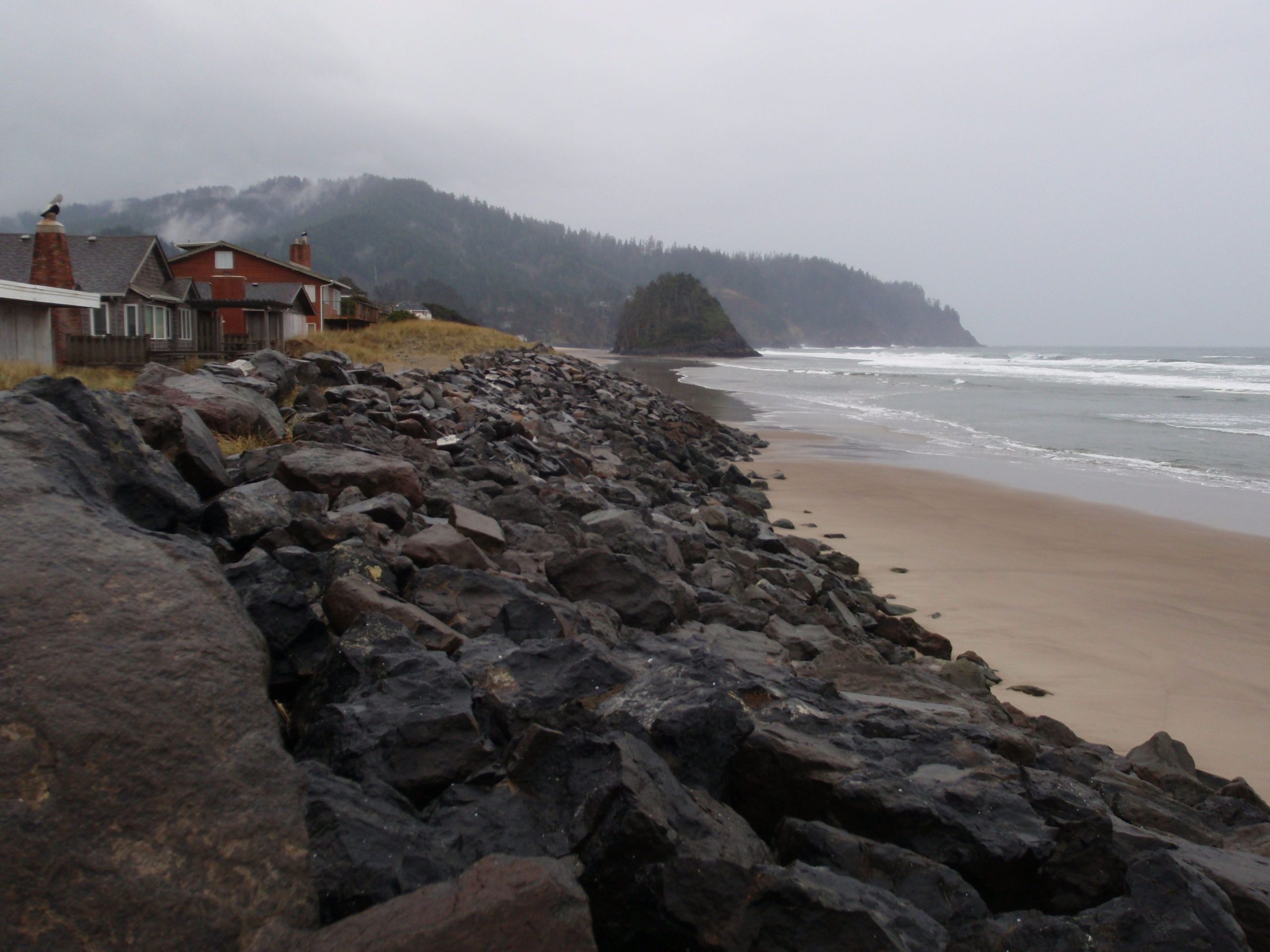 Riprap in Neskowin Beach, OR.

Preserving public access to beaches is cherished by Oregonians and a defining feature of our state. Oregon is one of only three states in the United States that guarantees public access to all dry sand beaches. Public access to the beaches provides all people the opportunity to experience the Oregon coast. To protect this right, Oregon land use law places many restrictions on the use of shoreline armoring structures. These protections work to ensure that Oregon’s beaches remain uninterrupted by rocky riprap.

Shoreline armoring is the practice of using physical structures, such as sea walls or riprap, to create a boundary between the ocean and the shoreline. Riprap is a barrier made of loose rocks and boulders that is built between the sea waves and shoreline. While these structures are intended to protect privately owned properties on the shoreline from coastal erosion, they also take up large portions of the beach that often reduces the width of the beach available for public use.

Our clients, Oregon Shores Conservation Coalition and Surfrider, are fighting against the implementation of a shoreline armoring project in Tillamook County. This specific armoring project intends to use riprap to protect several privately owned properties in Pine Beach near Rockaway, OR. Under Oregon Statewide Land Use Planning Goal 18, shoreline armoring structures, such as riprap, may only be used to protect properties that were developed prior to 1977.

In the fall of 2021, however, the Tillamook County Board of Commissioners approved a request by multiple homeowners to use riprap in the dunes located in front of the homes. The commissioners’ approval blatantly ignores Goal 18 restrictions on riprap and armoring. All of the properties involved in this case were developed after 1977, and are therefore not eligible for riprap under Goal 18. In addition, the Pine Beach homeowners failed to utilize any available mitigation measures that are not as harmful, such as non-structural solutions including vegetative stabilization and managed retreat.

“Despite the wishes of concerned community members and groups like Oregon Shores and Surfrider, the County approved an exception to Goal 18 which will allow riprap on a relatively natural area of the Oregon shore. By approving these applications, the County is demonstrating a preference to protect private development over the protection of the public’s access to the beach and the future health of Oregon’s coastal ecosystem.”

Oregon Shores Conservation Coalition and Surfrider are fighting against the Tillamook commissioners’ decision by filing an appeal with the Oregon Land Use Board of Appeals (LUBA). There will be hearings in May and June with the Tillamook County Board of Commissioners to determine whether or not the Pine Beach homeowners should be granted a Goal Exception.

Despite pending efforts to appeal Tillamook’s decision with LUBA, irreversible destruction has already taken place. The Pine Beach homeowners began construction of a riprap wall in November. So far, they have successfully removed trees, stumps, and shrubs, which function as natural barriers to erosion, to prepare the area for riprap. If the appeal by Oregon Shores and Surfrider is successful, it will be imperative that restoration of this region be enforced and any further armoring be removed.

In 1967, the Oregon legislature passed the Beach Bill, and it was signed by Governor Tom McCall. The Beach Bill deems access to dry beach as a “birthright” of Oregonians. The Oregon Parks and Recreation Department is responsible for protecting this right, ensuring that all people have access to the beach as a public recreation area.

In 1973, the legislature passed the Land Use Planning Act, which led to the adoption of 19 Goals that outlined statewide policies for land use and the protection of coastal resources. These policies included Goal 18, which restricted the use of armoring structures for properties developed after 1977. As scientists and policymakers became more aware of the hazards of shoreline armoring, Goal 18 functioned as a formal notice to the public that the practice of shoreline armoring would no longer be allowed for new properties, without penalizing those who previously built structures before 1977 without knowing the extent of the risks.

Since the Beach Bill’s passing, Oregonians and visitors to the state have enjoyed and benefited from the right to public beach access.  In comparison to the small, crowded sections of public beaches you may see in other states, like California, land use laws, like Goal 18, work to preserve Oregon’s signature stretches of long, uninterrupted beach that can be enjoyed by all.

Coastal Tribes and the Custom of Use

Even after the Oregon legislature passed the Beach Bill, opponents tried to challenge the law in court. But in 1969, the Oregon Supreme Court upheld the constitutionality of the Beach Bill, protecting public access to beaches in Oregon to this day. The Supreme Court’s ruling was based on the public’s ancient and uninterrupted “custom of use” of the beach. Although opponents of public beach access tried to argue that historically people in Oregon did not exercise the right to use the beach, the Court rejected those arguments, recalling that “European settlers were not the first people to use the dry-sand area as public land.”

It’s important to note that while the Oregon Supreme Court decision to protect the public’s right to the beach was based in part on Coastal Tribal Nations’ historical use of the beach, these same tribal nations’ use and enjoyment of the dry-sand beaches was interrupted by the arrival of the same European settler colonists mentioned by the Oregon Supreme Court in 1969.

Shoreline armoring does not protect or conserve the beach, and has major ecological impacts.  Armoring a beach impedes natural sand movement, and blocks the ability of the beach to replenish itself in response to changes in sea level, storm waves, and other natural processes. Studies have also shown that armoring also greatly impacts biodiversity of beaches. For example, one study found that beaches with sea walls had significantly fewer and smaller intertidal species, three times fewer shorebirds, and four to seven times fewer gulls and other birds than unarmored beaches.

As sea level rise increases, due to climate change, more and more oceanfront properties will become threatened by an encroaching shoreline. In spite of growing awareness of climate change and its consequences, privately owned properties continue to be developed on the oceanfront, knowingly placing themselves on the frontlines of climate change. Cases similar to the Pine Beach case are sure to arise as the impacts of climate change intensify. It is important to set precedent now, in order to prevent a larger wave of private property owners seeking exceptions to the Oregon law at the cost of public access.

Oregon Shores Conservation Coalition is a non-profit public interest group that aims to preserve the natural communities, ecosystems and landscapes of the Oregon coast while conserving the public’s access.

Surfrider Foundation is a non-profit grassroots organization that advocates for the protection and enjoyment of the world’s oceans and beaches. Surfrider has many chapters and volunteer based campaigns across the United States. Learn more about Surfrider’s campaign, Prevent Shoreline Armoring in Tillamook County.

Learn more about the appeal from our clients, Oregon Shores and Surfrider.

The True Cost of Armoring The Beach, Surfrider: https://sandiego.surfrider.org/the-true-cost-of-armoring-the-beach/