Something so important, so essential…

With all the buzz about the amazing Stories of Trust films Our Children’s Trust, WITNESS, and iMatter are putting together documenting the stories of the youth plaintiffs who are pursuing Atmospheric Trust Litigation (ATL) cases against their government, we thought it would be helpful to explain the legal backing behind the cases. 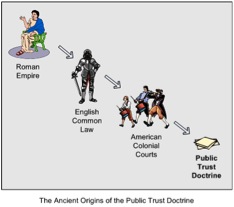 The Public Trust Doctrine places an obligation upon the government to ensure that certain natural resources, like water, called “trust resources” are not substantially impaired or put entirely into private hands. Put another way, the government can allow some use of these resources so long as the resource won’t be substantially impaired by the use or completely turned over to a private entity. For example, a corporation could not move into Oregon and bottle all of our fresh water without violating the public trust doctrine. Nor could the same corporation bottle a majority of our fresh water supply without violating the doctrine.

So, what does the Public Trust Doctrine protect? Water. After that, it varies from State -to-State and country-to-country. For example, here in Oregon our courts and legislature have recognized that fresh water, submerged and submergible land (think streambeds), shorelines, forests, and wildlife are all natural resources that the State of Oregon holds in trust for its citizens.

But there is one essential natural resource that needs to be recognized under the Doctrine: our atmosphere. We learn as schoolchildren that without Earth’s atmosphere our planet would not support life. In the ATL cases, the youth plaintiffs are asking the courts to recognize that the atmosphere is an essential trust resource.

The stakes are high. We only have a few more years in which we can cap our greenhouse gas emissions and start reducing them in time to ensure that climatic tipping points – the melting of ice sheets or thawing of the tundra – don’t occur. After these tipping points, we simply won’t be able to return our atmosphere to its present condition and life on our planet will change forever. The young plaintiffs in the ATL cases recognize these facts and are demanding that our government take action before it is too late. Will you join them? Support the Oregon ATL case today with a donation to Crag, who is representing two amazing young women in their lawsuit against our state.