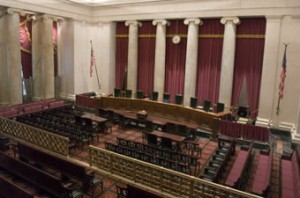 March 20, 2013, Washington, DC — Today the U.S. Supreme Court reversed and remanded a Ninth Circuit ruling requiring Clean Water Act permits for discharges of heavily polluted stormwater along two logging roads in northwest Oregon. Under the Supreme Court’s 7-1 ruling, it is up to EPA whether to require permits for such discharges – something EPA thus far has refused to do.

Jeffrey Fisher, co-director of the Stanford Supreme Court Litigation Clinic, explained that: “The Supreme Court rejected Industry’s and the governments’ contentions that the federal courts lacked jurisdiction over this case and that plaintiffs may not seek damages for past violations of the Clean Water Act’s permit requirement.”

On the merits, the Clean Water Act requires permits when (1) discharges flow from a “point source,” such as a pipe, man-made ditch, or channel and (2) they are associated with industrial activity. Mr. Fisher continued that even here the Court agreed to a significant extent with NEDC: “The Court agreed with the Ninth Circuit’s holding that channeled stormwater runoff from logging roads constitutes a ‘point source.’ The Court also rejected Industry’s and Oregon’s arguments that applicable regulations dictate that these discharges are not associated with industrial activity. Instead, the Court held merely that EPA’s current position that its regulations deem these discharges to be non-industrial is “permissible” and “rational” [slip op. 14].

According to Mr. Fisher, “This holding puts the ball squarely in EPA’s court. If EPA determines through further analysis that these discharges actually are associated with industrial activity or otherwise are a significant source of pollution, then permits will be required.”

“Because the Court implicitly accepted that logging roads may be subject to the Clean Water Act’s stormwater provisions, said Mark Riskedahl, Executive Director of NEDC, “people who care about clean water and healthy fish populations will continue to press EPA to deal with polluting logging roads.”

Crag Law Center staff attorney Chris Winter stated: “In Oregon, the timber industry has evaded the reach of the Clean Water Act’s permit program for years. Today’s ruling, while disappointing, provides concerned citizens with other tools to fight to protect the Tillamook State Forest. We will continue to advocate for the application of the Clean Water Act to logging roads and other pollution on federal and private forestlands as well and take action to improve water quality throughout the region.”

“This is a setback for streams and native fish populations across the West,” said Paul Kampmeier, an attorney with the Washington Forest Law Center, who along with Chris Winter of the Crag Law Center represented NEDC throughout the litigation. “This is also a setback for people who value clean drinking water, and for those working to protect rivers, streams, and wildlife habitat from logging road pollution. But, that said, I can promise you that it is not the end of the matter.”

The lawsuit originated in 2006, when NEDC sued the Oregon State Forester and four timber companies alleging they were violating the Act by dumping polluted stormwater into streams from pipes, ditches and channels along logging roads without the required National Pollutant Discharge Elimination System (NPDES) permits. The Northwest Environmental Defense Center Washington Forest Law Center Crag Law Center defendants claimed they were exempt from the permit requirement, a defense the Ninth Circuit rejected in May 2011. The defendants then sought Supreme Court review.

In the western United States, logging roads are a major source of sediment pollution, which degrades water quality and contributes to the destruction of salmon and their habitat. While taxpayers are spending billions of dollars to recover salmon, State non-point source programs – including Oregon’s – have failed to stem the flow of sediment pollution into prime habitat.

Oregon has been given every chance to protect water supplies and salmon habitat from logging road pollution, and the State simply failed to do so.  For over 40 years, the Clean Water Act has succeeded in cleaning up our rivers because it requires accountability and measurable results.  One thing remains certain, the conservation community will continue to fight for accountability and cleaner water.