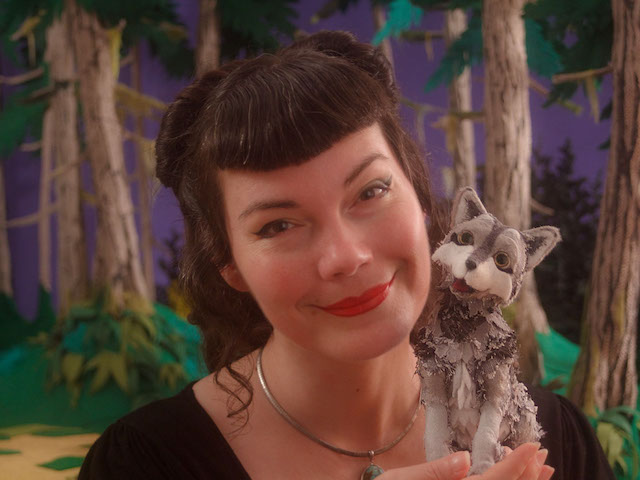 Suzanne Moulton (Suzie) has dedicated her life and artistic talent to help raise awareness to endangered and threatened wildlife and natural resources. Most well-known for her work as a stop-motion fabricator, Suzie has worked on projects such as Coraline, Frankenweenie, and ParaNorman. As a supporter of Crag, Suzie has hosted a number of creative workshops teaching people more about the creatures and natural regions that Crag works to protect. 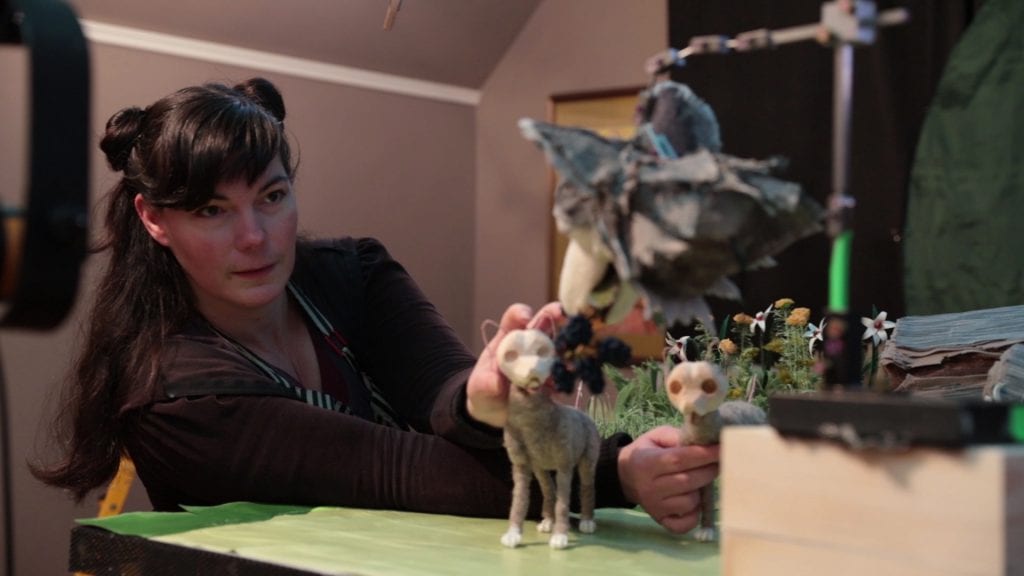 Suzie Moulton blocking out the action for a pup scene for “Nowheres Wolf”. Photo by Leila Chieko.

Originally from the Northeast, Suzie was raised on a remote farm as a part of the Back-To-The-Land movement. Although, she says, many would describe the farm on which she grew up as “in the middle of nowhere,” Suzie speaks fondly of her childhood, enveloped by nature. It is this upbringing, constantly surrounded by the outdoors, Suzie explains, that sparked her passion for conservation and the outdoors.

As a child, Suzie saw firsthand the impact that the clearcutting of forests had on the biodiversity of her home. When she moved to the Northwest, Suzie reminisces fondly on the feelings of amazement and awe she experienced coming face to face with the abundance of biodiversity of old and ancient growth forests. She spent her childhood entwined with wildlife, and yet, because many east coast forests are the product of clear cuts that have been reconstructed, their biodiversity represents only a fraction of that found in the old and ancient growth forests of the west coast. She had never seen anything like it and wanted for others to feel her same excitement towards the region and share her desire to protect it. It was through her experience moving out west that Suzie realized that her true passion lies in forest and wildlife conservation.

Suzie first found a way to put this passion into action in college when she became involved in puppetry and stop-motion fabrication. Making puppets and stop-motion characters, Suzie found that people were often only interested in seeing the animals that they were comfortable with or had grown up surrounded by, ignoring altogether the creatures that she had such an admiration for and that make up the incredible diversity of the Pacific Northwest. In speaking of her desire to bring people’s attention to the abundance of wildlife diversity that existed in the Pacific Northwest, Suzie found herself with the unique ability, through her art, to inspire within people a sense of empathy towards the animals she was portraying.

Realizing her unique position, Suzie started using art to teach people about forest and wildlife conservation. As a Crag supporter, many of Suzie’s projects have supported Crag’s efforts to protect wildlife, even working with our very own Ralph Bloemers to develop the Thriving With Fire series and its starring character, Dotty Owl. The series raises awareness about wildfire ecology and dispels myths about forest fires. When asked what broad message she hopes people take away from her films and projects, Suzie hopes that her art will help people to bridge the gap between saving natural resources and protecting the resources that we rely on to survive. “Stop motion sparks imagination and hope. The best way to create change,” Suzie explained, is to have “imagination, ingenuity, and action.” Suzie hopes that the characters she creates and the projects that she is involved with will inspire imagination within her audiences, encouraging them to then go on and take action in their own communities. 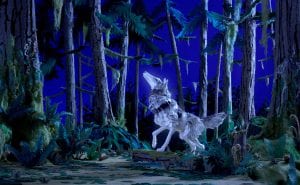 Journey brought to life in the Nowheres Wolf short film

Her upcoming project, Nowheres Wolf, aims to raise awareness about and challenge people’s misconception about wolves. The film follows wolf OR-7, lovingly named Journey, who is the first confirmed wolf west of the Cascades since the last wolf bounty had been collected in 1947. When she was living in California and OR-7 was first making his way south, she saw the fascination and excitement surrounding OR-7’s reintroduction into old wolf habitat. Yet, at the same time, she saw people expressing fear about what they perceived to be a dangerous animal moving closer to their homes and families. After moving back to Portland, Suzie, in collaboration with a number of local artists, began work on Nowheres Wolf. Suzie spoke of her goal bring the passion and excitement that people felt about Journey back with her and to change people’s understanding about a creature that has long been misrepresented by fairytales and Hollywood. In reality, Suzie explained, wolves are very caring, family-oriented animals, not the violent beasts that they are often depicted as being.  Nowheres Wolf portrays Journey not as a vicious beast, but for what he truly is, a creature longing to belong, which is something that we all can relate to.

Currently, Suzie is working on a Seed and Spark crowdfunding campaign to help fund the remainder of her work on Nowheres Wolf and pay collaborating artists. Donations are being accepted through July 20th. All support is welcome, and even if you are not in a position to donate, following her account offers her eligibility for discounted film festival fees. Additionally, Suzie regularly hosts workshops throughout the Multnomah county library system.

*Thank you to Suzie for providing the behind the scenes photos of her work!

Grace Sipp is a DukeEngage Intern at Crag for Summer 2019. She is a rising sophomore at Duke University majoring in Public Policy, focusing in environmental policy. Grace is interested in learning about the inner workings of environmental nonprofits, and potentially going to law school herself.