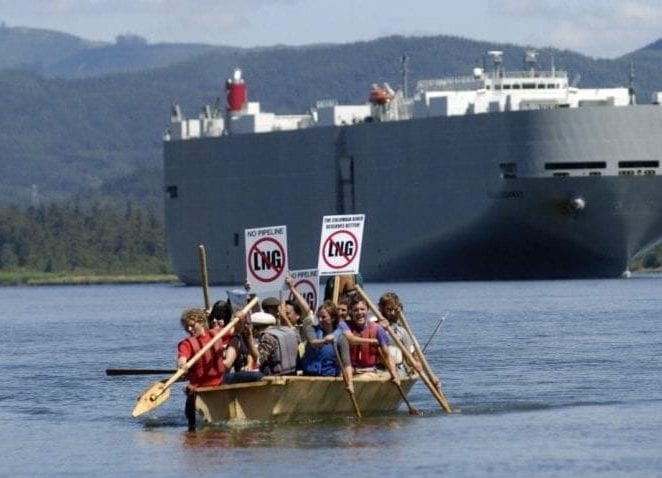 For over a decade, a Canadian fossil fuel corporation has been attempting to construct a 229-mile liquified natural gas (LNG) pipeline and export terminal called “Jordan Cove.” Construction of the Pacific Connector Gas Pipeline would require a clearcut across fire-prone forests and private lands in southwest Oregon to carry 1.2 billion cubic feet of fracked natural gas per day to the LNG Facility on the North Spit of Coos Bay. The Federal Energy Regulatory Commission (FERC) has ruled that the Jordan Cove LNG project is not in the public interest twice already: once in March 2016, and again in December 2016. In 2017, Pembina, the Canadian corporation behind the Jordan Cove project, began filing for FERC consideration again under the pro-energy Trump administration. The FERC released a Draft Environmental Impact Statement (DEIS) on March 29, 2019, which provides an environmental assessment of the project and its potential effects. Until July 5, the FERC is considering comments from community members as it finalizes its decision regarding public need for the project.

Organizations and community members are working hard to keep the public informed and involved throughout this complex, lengthy process. For more information and ways to get involved, visit these sites:

Click the link for submission instructions. Comments can be submitted online or via mail. Be sure to reference the project docket numbers (CP17-494-000 for the export terminal and CP17-495-000 for the Pacific Connector pipeline) with your submission.
Instructions