Taking Direction from the Next Generation 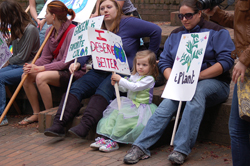 Last week Crag filed groundbreaking climate litigation on behalf of Oregon youth and their families against the State of Oregon and Governor Kitzhaber.  The lawsuit filed in Oregon was part of a hatch of litigation filed around the country and the world.  The hatch received significant media attention with stories in the NY Times, the Oregonian, the Huffington Post, and the UK’s Guardian.  The public’s interest has only increased now that youth are also taking to the streets in a series of iMatter Marches being staged in over 100 cities around the world.

The article that most struck home for me was a Guest Opinion piece in Eugene’s Register-Guard written by seventh grader Sage Fox.  In the piece, she asks the now generation to take action before it is too late for the next generation: “This is not the same world you grew up in. When you were a kid, you thought everything was fine. Now, we live in a world so polluted that people have trouble finding enough clean water across many parts of the globe. . . . The children of the world plead to you: Don’t gamble with our future.”

Ironically, or perhaps not, on the very night that the climate litigation was hatched, Crag was the recipient of a benefit concert put on by world famous Pato Banton and the Now Generation.   At some point, very late in the evening, Pato issued his own call for action on climate change with the same sense of urgency reflected in the Seventh Grader’s musings.  He sang:

“Yes Mama Earth is in a state of emergency

Pollution of the air the land and seas

And it affects us globally”

His solution was simple:  “Let’s get together now and heal this world.” It gave me hope that perhaps the now generation isn’t so off, and that perhaps we can do the right thing now before it’s too late.