The Future of Our Coast 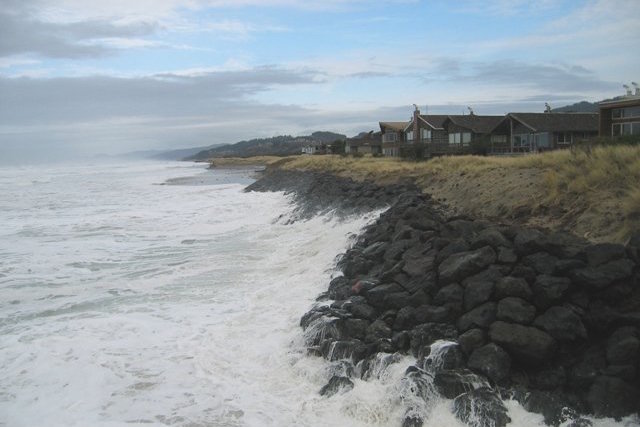 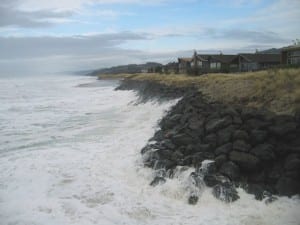 The future of our coast?

What will Oregon’s beaches and coastal communities look like in 100 years? How will storm surge and sea level rise impact building flooding? Erosion? Beach access? How would that future change if we were to adopt different land use management policies now?

Yesterday I had the pleasure of attending a meeting of the Tillamook Coastal Futures Network, a group working to answer some of these questions. A team of Oregon State University professors, researchers, and graduate students is leading the project, together with land use planners, elected officials, state agencies and community members. The project’s goals include providing information and tools to local coastal decision makers in order to assess coastal erosion hazard risk and adaptive capabilities in the context of increasing storm surge and sea level rise, as well as increasing population and development pressures.

The project team is using and developing models that integrate coastal hazards projections with human behaviors like development patterns and existing land use policies. The team then inputs different possible policies, such as building shoreline protection structures on all coastal properties, and develops an image of how that policy would affect various metrics, like beach accessibility and impacts of coastal flooding.

At the meeting, the team presented the results of several different policy narratives, that is, different combinations of policies to manage coastal hazards. For example, in the laissez-faire scenario, current land use and shoreline construction policies are relaxed, allowing new development in hazard areas and outside of current growth boundaries, and allowing construction of shoreline protection structures (riprap) on any property. In other words, under this scenario existing and future development trumps the protection of coastal resources, public rights, recreational use, beach access, and scenic views. Not surprisingly, the modeled result of this scenario is the construction of shoreline protection structures along almost all of the shoreline, reducing beach access. Impacts of erosion are lowered because of the protection structures, but impacts of flooding are heightened because of the same structures and their effect on water levels. To me, the biggest surprise in this scenario was the expense of maintaining all those riprap structures over time, which adds up considerably.

In another scenario, dubbed the “realign” narrative, policies are implemented that involve changing human activities to adapt to the changing environment. These include restricting development in hazard zones, prohibiting repeated repair of flood or erosion damaged structures, and establishing conservation or open space areas within hazard zones through rolling easements and property acquisition. Under this scenario, fewer beachfront properties install protection structures, therefore beach access is not as limited as under other scenarios. There is also less damage to buildings and infrastructure from flooding and erosion as over time these are moved out of hazard areas. Surprisingly, the buyouts and transitioning lands at greatest risk of hazard to open space is projected to cost less than the construction and long-term maintenance of beachfront protective structures under the laissez-faire scenario.

We have a long way to go before any of these policies will be agreed upon and implemented. But the outcome of the models, and especially the maps and images of the results, might play a significant role in helping coastal residents and local governments understand how the policy choices we make today will impact the future of the coast.