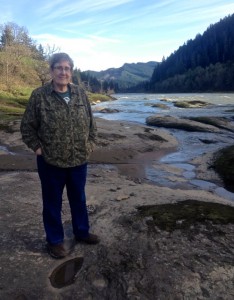 For this installment of The Way We Work, we’re focusing on the recent victory that Crag and our clients Cascadia Wildlands, Center for Biological Diversity and the Audubon Society of Portland  achieved earlier this year.  In February,  the State of Oregon cancelled 28 timber sales located on swaths of mature coastal forest that make up the dwindling nesting habitat of the endangered sea bird, the marbled murrelet.

We spoke with Francis Eatherington, Conservation Director for Cascadia Wildlands, about this thrilling triumph for the environment.  Francis has lived and worked in the forests of western Oregon all of her adult life and was a forestry worker for 20 years before working as the Conservation Director for Umpqua Watersheds.  She began working with Cascadia Wildlands in 2010.

I can see you have a long history of protecting old forests here in Oregon.  Can you tell me about how you first came to work with Crag on forest conservation issues?

In 2000, when I was working with Umpqua Watersheds, I contacted Crag in relation to the Mr. Wilson timber sale, and then again in 2004 in relation to the Déjà vu timber sale.  Crag backed me up; it was a bonus getting to know them, and even though [the sales] were bittersweet, a lot of good things came out of them.  In the ensuing years, Crag was in the background, ready to pick up projects we were working on.  Just knowing they are there as one of our resources is a really positive thing that helps us be bold in our actions because we know that they are fighting for us in the courts.

You’ve spent a lot of time in the old forests of Western Oregon.  Can you tell us about some of the places you are most passionate about protecting?

I love all of Oregon’s forests, from the dry east side to the rain forest.  I think my favorite might be in the coastal forests with the wet, dripping trees, and it’s close to where I live.

What are your biggest concerns for Oregon’s forests in the coming years?

One of my biggest concerns is the atrocities that private land is allowed to get away with.  They continue to clear cut right over streams, even though Oregon’s own studies show that it is detrimental.  The State of Oregon hasn’t really progressed despite its own Forest Practices Act.  Aerial spraying of herbicides and cutting over streams continues, and we have some of the worst herbicide spraying practices in the country.

What resources did Crag provide that made it integral to this recent  lawsuit?

This was a lawsuit against the state—there’s been a lot of public interest in federal issues, but I think Crag is uniquely positioned to be focused on state laws and issues.  That was a really important part of this.

What about Crag inspires you and your work as Cascadia Wildlands’ Conservation Director?

I’m not a lawyer; my background is in forestry—I need lawyers!  To be able to see illegal things occurring in the forest and have Crag say, “Yeah, you’re right, we’ll back you up,”—I think that’s one of the positions that Crag fulfills in that we know they are there and that we can call on them when we see these infringements on the law.  It helps us pursue our daily work in a more confident way.  They are a great group to have representing us and the environment.

Emma Stanford is a recent graduate of Portland State University, where she studied Political Science and Spanish and wrote her undergraduate thesis on the ill effects of global capitalism on the forests of developing countries.  A Northwest native, her biggest passions are currently the Cascadia bioregion, gardening, and bicycles.