For this installment of The Way We Work, we spoke to John DeVoe, executive director of WaterWatch of Oregon.  Working to establish balanced water policy, protection and restoration of streamflows, and protection of threatened native fish, WaterWatch has partnered with Crag on several projects, including the Klamath Wildlife Refuges, dams in the Rogue Basin, No to Nestle, and the City of Bend water pipeline. 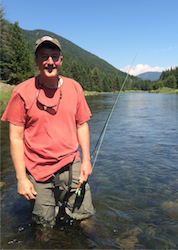 Crag has been doing a lot of work with WaterWatch over the years.  Can you tell us a bit about the goals and importance of a couple of these projects?

Klamath – Crag has represented a group of conservation organizations on issues of conservation planning for the Klamath Wildlife Refuges. These are some of the most important refuges in the system; about 80 percent of waterfowl in the Pacific Flyway use the waterways during migration. The U.S Fish and Wildlife Service was supposed to produce Comprehensive Conservation Plans according to a deadline in federal law, but failed to produce those plans. With Crag’s help we won a case, and are now waiting for the draft plans.

Fielder Dam – There are two dams on Evans Creek, an important tributary for salmon in the Rogue River. Fielder Dam and Wimer Dam were both unused irrigation diversion dams, and the fish ladders are woefully inadequate for migration. Fielder Dam is number 4 on the Oregon Department of Fish and Wildlife’s list of the most significant barriers to fish passage. Wimer Dam is number 8.  These dams stood against reason for a long time, and conservation groups worked with the landowners for years to get them down and couldn’t get it done. WaterWatch came in and negotiated and eventually sued under the Endangered Species Act. In the permitting stage, we secured permission to take the dams down, found the money to do it, and had almost completed all the steps toward removal. A lot of our work on this project has been with the Geos Institute and American Rivers, as well as some fly-fishing clubs. After all that, Crag had to come in to defend the floodplain permit and successfully defeated an objection to the permit.

The dominoes began to fall, so now we’re ready to go. Where the project stands now, Wimer Dam is being removed literally as we speak; Fielder Dam will come down in August. The result of all this is really great because removal will mean unimpeded access to 70 miles of habitat for Steelhead Salmon, and a little bit less for Coho and Chinook as well as Cutthroat Trout. This builds on the momentum WaterWatch has built in the Rogue Basin by removing four major dams: Savage Rapids, Gold Ray, Gold Hill, and Elk Creek. The Rogue River is a really important river for salmon and it’s one of the top three salmon producers on the West Coast.

What are your organization’s other priorities, goals and projects?

Here at WaterWatch of Oregon we work to protect and restore streamflows; mostly we focus on water law and policy so we’re currently very busy with the drought.  We want Oregon to have healthy rivers and balanced policies that manage our water responsibly.

What are your biggest concerns for rivers in Oregon right now?

Climate change.  A legacy of outdated laws.  Stream flows are low, temperatures are high, many rivers are losing substancial numbers of adult pre-spawning salmon.  If you’ve seen the headlines recently, this is happening alarmingly fast.  We are probably going to lose more than half of the painstakingly-built Sockeye population, much of which mysteriously disappeared after going over the Bonneville Dam. Some want to blame the drought, but we have to recognize the human component and our poor management of water.

What about Crag inspires you and your work?

For more info about WaterWatch of Oregon:

McKenna Ganz is a pre-law junior at Duke University.  She interned with the Crag Law Center in the summer of 2015 as part of the Duke Engage Portland program. She is majoring in Global Culture, Media, and Political Conflict with minors in Economics and Global Health.