Up with Salmon, Down with Clearcuts 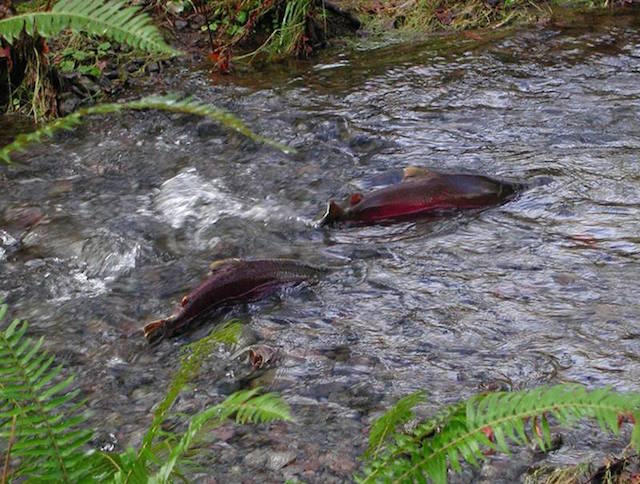 Today Crag Law Center along with Amy Atwood of The Center for Biological Diversity filed a complaint against the Oregon Department of Forestry for poor logging and road-use practices in the Tillamook and Clatsop state forests that harm threatened coho salmon through landslides and erosion into streams that violate the Endangered Species Act.

“The Oregon Department of Forestry has a long history of thumbing its nose at the Endangered Species Act. It’s been one broken promise after another for the last twenty years,” said Chris Winter, Co-Executive Director of Crag Law Center. “Enough is enough. Massive clearcuts and logging on steep slopes are obviously bad management practices for coho salmon. The State needs to clean up its act like every other responsible land manager.”

Five fishing and conservation groups are a part of this lawsuit that was filed in Eugene by the Center for Biological Diversity, Pacific Coast Federation of Fishermen’s Associations, Institute for Fisheries Resources, Cascadia Wildlands and Native Fish Society.

“Logging by the Oregon Department of Forestry is one of the main reasons our coastal coho are in trouble,” said Noah Greenwald, endangered species director at the Center for Biological Diversity. “The department needs to do more to ensure it doesn’t harm these beautiful and important fish.”

Forestry department officials developed a draft Habitat Conservation Plan in the late 1990s that would have granted them a permit to allow some harm to threatened and endangered species — including the coho, marbled murrelet and spotted owl — but only in exchange for long-term habitat protections.

The department, however, never finalized the plan. Forestry officials did not want to enact stream protections that National Marine Fisheries Service scientists determined were necessary to ensure the coho’s survival. The forestry department is again looking at developing a plan, but has made no firm commitment to do so.

“Poor logging practices by the Oregon Department of Forestry is causing real harm to Oregon Coast coho and commercial fishing families who depend on these magnificent fish for their livelihoods,” said Glen Spain, northwest regional director for both the Pacific Coast Federation of Fishermen’s Associations and the Institute of Fisheries Resources. “Stronger protections for streams to protect the coho, clean water and fishing-dependent jobs and communities is decades overdue.”

The two state forests contain nearly 500,000 acres on the Oregon North Coast essential to the survival of Oregon Coast coho. The lack of adequate stream protections on these lands was a primary basis for the National Marine Fisheries Service’s decision to protect the fish under the Endangered Species Act. That agency determined in a 2011 status review that “we are unable to conclude that the state forest management plans will provide for Oregon Coast coho salmon habitat that is capable of supporting populations that are viable during both good and poor marine conditions.”

“The Oregon Department of Forestry is taking such a shortsighted approach to the Tillamook and Clatsop state forests,” said Nick Cady, legal director at Cascadia Wildlands. “These older, coastal rainforests are critical to the future of coho salmon, and there are better uses for these forests than the short-term profit to be gained from clearcutting.”

The Center for Biological Diversity filed a similar notice in 2014. But the Center delayed litigation because state forestry department officials said they were working with the conservation community and the timber industry to develop a new management plan that would potentially avoid harms to salmon and streams. Four years later no such plan has materialized.