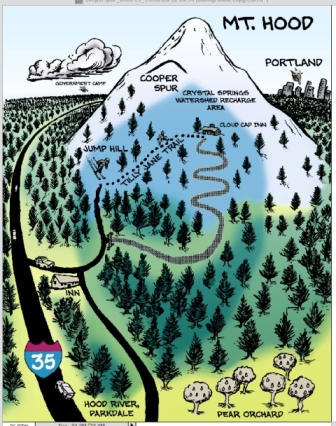 Representing the Hood River Valley Residents Committee, Crag filed a lawsuit this week against the US Forest Service for failure to complete the Cooper Spur/Government Camp land exchange mandated by the Omnibus Public Lands Act of 2009. The Act required the Forest Service to complete the exchange in 16 months, but six years have passed and the trade is threatened by the Forest Service’s failure to execute the necessary steps to finalize the trade consistent with the Act

The 2009 Act was intended to put an end to decades of litigation and dispute over the future of the north side of Mt. Hood where Mt. Hood Meadows LLC had made several controversial attempts to locate large designation resorts. The Act calls for 770 acres at Cooper Spur, owned by Mt. Hood Meadows, to be traded for 120 acres at Government Camp owned by the Forest Service. The Cooper Spur property includes the Crystal Springs watershed and would become part of the Wilderness area of the Mt. Hood National Forest while the Government Camp properties are already planned by local zoning code for extensive development.

Mike McCarthy, an orchardist who lives in the upper valley and member of the Hood River Valley Residents Committee, stated: “There is a law on the books to complete this exchange, and the Forest Service has failed to meet its terms. We don’t enter litigation lightly but five years late is egregious. We cannot afford to sit idly by and let the Forest Service run this into the ground through inaction and abuse of their agency.”

Heather Staten, Executive Director for the Hood River Valley Residents Committee stated: “Over a decade ago, the environmental community, recreation clubs, local residents, Hood River County, Mt. Hood Meadows and our Congressional delegation put together a historic solution to protect thousands of acres of wilderness lands and a drinking watershed on the north side at Cooper Spur. This historic solution was put into the Mt. Hood Wilderness bill and signed by the President in 2009. The land exchange resolved a three decade old dispute, and the future of the north side is contingent on the Forest Service completing it.”

“The Forest Service was directed to complete this trade in 16 months, but instead of doing their job as directed they have acted beyond their legislative authority and sought to impose unreasonable conditions that threaten this historic solution. The public cannot afford to wait another month, let alone another 5 years, for them to do their job” according to Ralph Bloemers, attorney for the plaintiffs, Crag Law Center, who represents the Hood River Valley Residents Committee in the case.

Oregon’s congressional delegation is equally unhappy with the Forest Service’s lack of progress. In June, Sen. Ron Wyden, Sen. Jeff Merkley and Rep. Earl Blumenauer sent Forest Service Chief Tom Tidwell a joint letter expressing their dissatisfaction with the Forest Service’s progress on the trade “We are extremely concerned that its resolution is very delinquent, and this lack of completion is clearly contrary to our legislative intent, the language of the 2009 Act and the interests of the public and our environment. Any further delay is absolutely unacceptable.”

At a recent townhall held at Timberline Lodge on Mt. Hood, Sen. Wyden was even more blunt, “The most diplomatic way you can describe how the Forest Service has reacted since then is inertia. But I’d probably describe it more as apathy or pretty much making the land exchange a pariah at the agency. And I’m telling you it’s going to stop. This is absurd that year after year after year it’s been impossible to get an answer. This is way, way, way over the line with respect to how an agency ought to go about handling a law that has been passed by the Congress. This is not the way it’s supposed to work.” Rep. Blumenauer added “It’s been 75 months and that’s too long. I would love to get this past the finish line. The Oregon delegation is united on this.”

Cooper Spur Wild and Free was formed in 2002 and is a diverse affiliation of 15 recreation, environmental, and citizen organizations working together to preserve and protect the Cooper Spur area. Their mission is to preserve and protect the biological integrity and historic nature of the northeast side of Mt. Hood in and around Cooper Spur from increased commercial activities, high impact recreational expansion, and timber sales on public and private lands in and adjacent to those lands. The groups involved in the coalition include