Victory for the Marbled Murrelet!

The Crag Law Center and its clients announced today that the State of Oregon has cancelled 28 timber sales that would have logged habitat for the marbled murrelet, an imperiled seabird that nests in coastal old-growth forest.  With those 28 timber sales off the table, our clients agreed to a reasonable settlement with the State and dismissed their lawsuit. 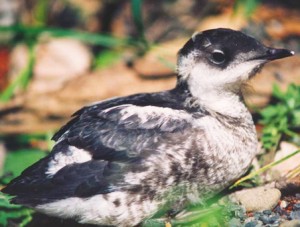 The settlement announced today hopefully brings to a close one of the uglier episodes in the history of the Oregon Department of Forestry (ODF).  The marbled murrelet is protected under the Endangered Species Act because past old-growth logging has destroyed large swaths of its habitat.  ODF manages some of the best remaining murrelet habitat in Oregon in the Elliot, Tillamook and Clatsop state forests.

But over the past several years, ODF has increased the rate of logging and by 2012 it was actively targeting murrelet habitat by auctioning off to the highest bidder irreplaceable stands of majestic forest and important nesting habitat.  ODF refused to get a permit from the U.S. Fish and Wildlife Service, and the feds turned a blind eye to the problem.  Our clients were the last line of defense, and we filed the lawsuit in May of 2012.

We immediately sought an injunction against further logging, supported by the opinions of some of the best experts in the field.  ODF quickly rolled over, unable to defend their timber sales, and in November of 2012 the federal court issued a preliminary injunction against 11 timber sales and any further logging of occupied habitat.  That initial injunction sent shock waves through ODF as it was the first time in recent memory – perhaps ever in the history of the agency – that a federal court enjoined the State of Oregon from logging state forests.

Instead of going to trial and defending its forest management practices, ODF instead cancelled an additional 17 timber sales – bringing the total to 28 – and agreed to reform its marbled murrelet policies.  With those changes in place, our clients agreed to bring the litigation to an end – for now.

Over the coming years, ODF has a chance to prove to the public that it takes seriously its obligations under federal law to protect threatened and endangered species.  In the past, ODF has viewed the timber industry as its main constituency, but that’s an antiquated view of how to manage our public lands.  Complying with federal law is not optional.  And neither is upholding the public interest in old-growth forest, clean water and native runs of salmon.

The Crag Law Center would like to thank its clients – Cascadia Wildlands , Center for Biological Diversity and the Audubon Society of Portland – as well as its co-counsel – Dan Kruse, the Western Environmental Law Center and Scott Jerger.  We would also like to thank our former staff attorney, Tanya Sanerib, who played a key role in this success.